VEX Round Up is played on a 12’x12’ square field configured as shown. Two alliances – one “red” and one “blue” – composed of two teams each, compete in matches consisting of a twenty-second autonomous period followed by two minutes of driver-controlled play.

The object of the game is to attain a higher score than your opponent alliance by scoring tubes upon goalposts, owning goalposts and by low hanging or high hanging from the ladder.

A bonus is awarded to the alliance that has the most total points at the end of the Autonomous Period. 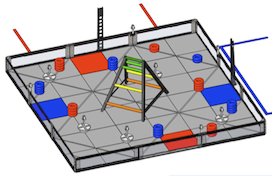