Today kicks off the 2014 FRC Season for Team 254. The mentors and students are equally ecstatic for this year’s challenge, Aerial Assist.

Today a group of students attended the 6:30 to 9:30 local San Jose kickoff at Morris Dailey Auditorium. A few others watched the NASA Live Stream from home. Subsequently, at 10, the team met for the team’s kickoff event and discussed the plan for the coming six-week build season. The team then broke up into groups and discussed strategies in terms of necessary robot qualities, priority tasks, and possible scores. The parents and mentors simultaneously discussed logistics and the build plan in more detail until the student leaders returned to present their ideas to the entire group.

After lunch, about 70 students congregated in the Bellarmine Robotics Lab to examine and better understand the team rules. In particular, they discussed the definitions of assist and possession and clarified the rules for such actions and others on the playing field. For the first two and a half hours, the group went through the relevant sections of the game manual and encouraged group discussion to find possible holes and list them to check with FIRST later. The group noticed some deviations in rules from previous years: the field is two feet narrower at 25 feet, and the match is 30 seconds longer. The autonomous period is five seconds shorter at 10 seconds, and the tele-operated period is 35 seconds longer at 2:20. Andrew Torrance noted the possible issues with battery life with the 25% longer match time. In addition to discussing rules, the team also formulated questions concerning the regulations to ask FIRST: 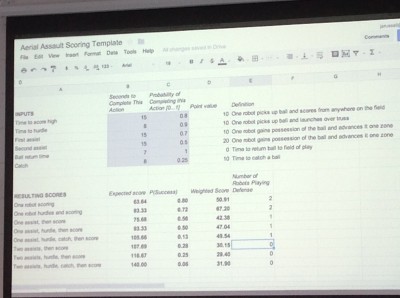 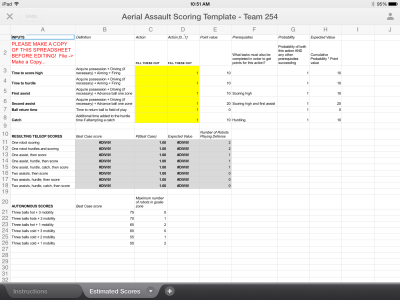 After a short break, the team’s new mentor Jared set up a Google Spreadsheet that evaluated the effectiveness of certain “assist” strategies, with combinations of 1-3 assists, a truss “hurdle,” and the truss “catch.” He took student input for the point values corresponding to each action, the expected time taken for each action, and the probability of the action being carried out successfuly. He then calculated out a rough model of the weighted point values expected from strategies in the tele-operated mode of the match. The group was then able to analyze the efficiency of certain strategies. In the process of discussing strategies, the team also created two other strategy charts and lists (pictured). 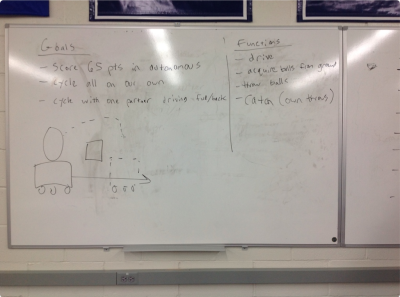 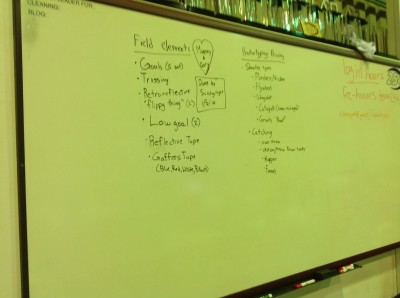 After dinner, approximately 20 students worked with the mentors to list some possible designs and to plan out the next week’s prototyping schedule. The group prioritized the prototyping of possible modules, specifically shooter designs and catching mechanisms, with design input from students and advice from our experienced mentors. They also discussed what field elements were most necessary for prototyping for the next few weeks and listed them as well. Finally, they discussed the mathematics and physics of shooting a 25-inch, compressible, bulky, and irregular projectile into a 3-foot goal. For example, mentors noted that we might as well design a robot to shoot from farther away from the goal, since the shallower angle of entry would give greater allowance for error. Mentor Paul Ventimiglia also determined that giving the large exercise ball some backspin helped in precision, though it also required more energy to apply both linear force and rotational torque. 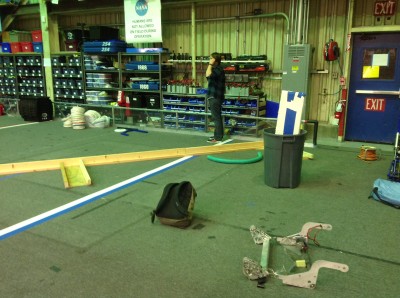 Tonight, we mainly focused on the building a preliminary goal with which to prototype before the field arrives and on prototyping and testing the effectiveness of a flywheel shooter and a slingshot shooter. Paul worked primarily with Godwin Vincent, James Holden, Jeremy Tanlimco, Vidur Maheshwari, Miggy Francisco, and Joncarlo Avila to design, sketch, and begin building a prototype for testing the effectiveness of a flywheel on such a large game object. They determined the best wheels with which to work based on their ability to grip the surface of the unusual game object. The prototype design was finalized and they plan to use four large wheels on the same axle hooked up to curved plywood “rims” to optimize the compression on the ball and somewhat minimize the size of the already bulky prototype. EJ Sabathia and Noah Marcel worked on the slingshot design, taping a 2013 Ultimate Ascent Frisbee to surgical tubing and hooking up the system to an alliance wall. The ball consistently bounced about 1/3 of the way down the court, given about 4 or 5 feet of backward stretch. 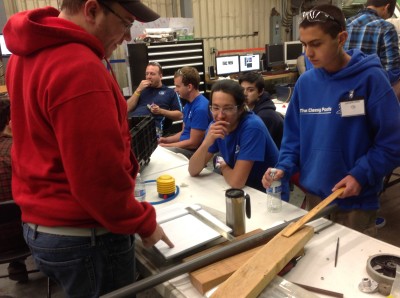