Hall of Fame on Display

Team 254’s hall of fame display is on display in the brand new Lorry I Lokey Center at Bellarmine.  The display is right by the front door, just to the left of the principal’s office. 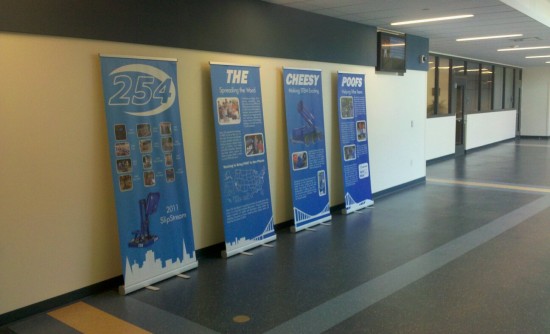 Hall of Fame on Display

This is the final design for the world champion t-shirts that were ordered today.  The shirts should come in early next week on like tuesday. 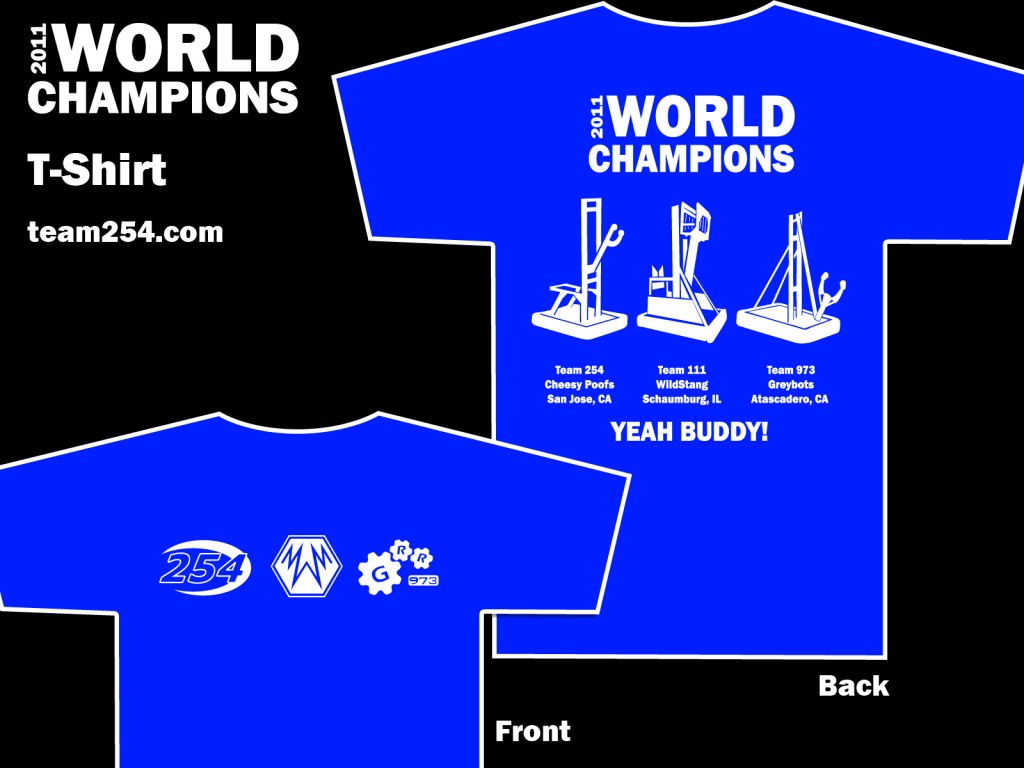 Last night, “Don’t Fail Me: Education in America” aired on CNN.  This documentary featured FIRST extremely heavily and Team 254 is featured in the final few minutes.

If you’re interested in watching it, it can be found on Youtube in 6 parts. Part one is here and the remaining 6 parts are posted by the same user. 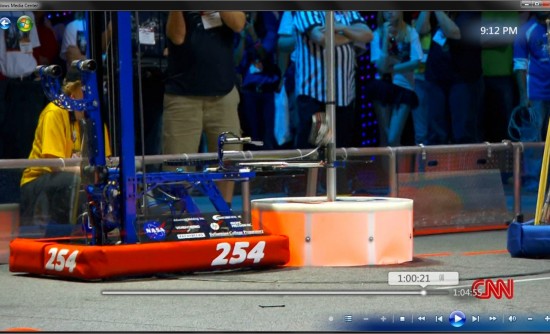 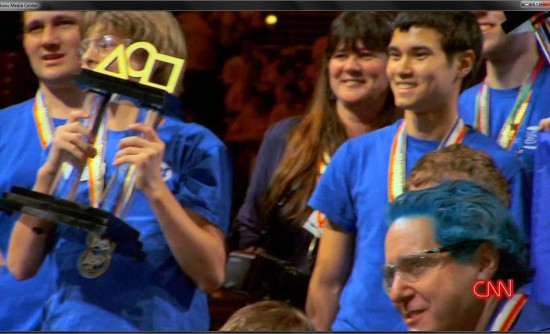 The final matches of FIRST Logomotion have been posted on Youtube.  Below are the videos we are featured in:

If you haven’t heard yet, we won World Championships.  We were allied with teams 111 and 973, and after making it through the tough Galileo division, we went on to dominate through Einstein and take it all. We additionally won the Industrial Design award for the whole competition.

As is team tradition, please remember to wear your team shirt tomorrow to show to everyone that you are a world champion.

Hall of Fame Sent Out

Today, the hall of fame was sent out to the print shop for final printing.  We have decided to go with a printed hall of fame display for increased portability and professionalism. 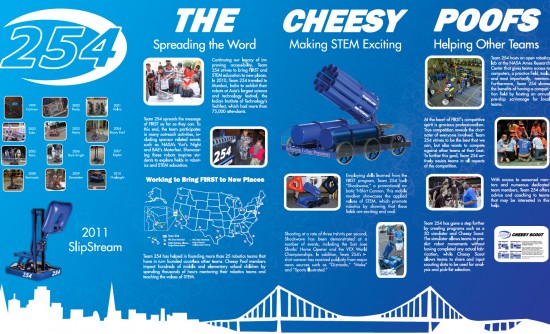 Above is the final layout for the display.  It will be printed on four 33″ wide panels each 80″ tall.  Great job to everyone who helped, especially Ryan for leading the project.

A large delegation from Team 254 traveled to Orlando today for the VEX Robotics World Championship.  Follow the action at robotevents.com with live webcasts and score updates from all of the divisions.

Over the past week or so, we have been experimenting with a ramp-style minibot deployment.

After taking inspiration from some other teams including our friends on The Pink Team, we have determined that this is a potentially much faster method of minibot deployment.  Over the next few days, we will work to come up with a final design and begin manufacturing.

This weekend, several team members met at the lab to prepare Shockwave the T-Shirt Cannon for its upcoming appearances.  Shockwave will be traveling to Orlando for next week’s VEX world championship and to St. Louis for the FIRST World Chmpionship.  In preparation for this, we created vinyl decals for Shockwave and built a crate.  Shockwave will be shipped to Orlando tomorrow. 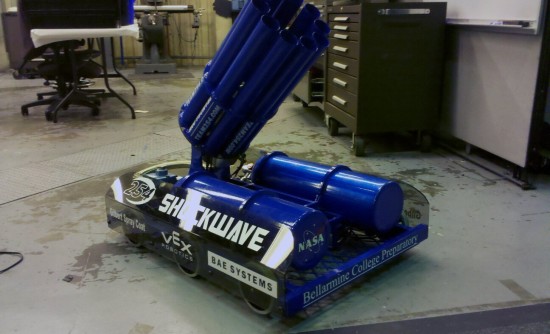 Shockwave with its new decals. 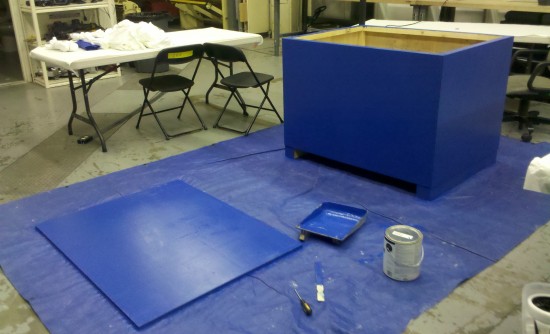 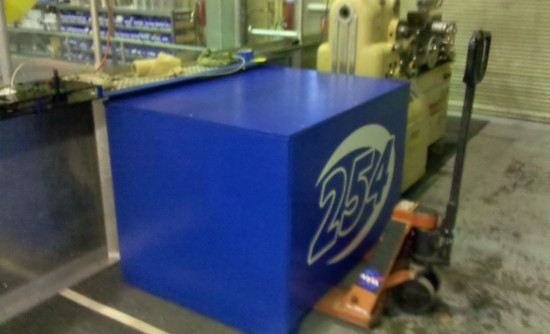 Shockwave ready to be shipped out.

Now that we are back at home with the practice robot, the programming team has had some time to make the one-tube autonomous routine faster and more reliable and also work on a two-tube routine.

The autonomous tube hanging is so reliable that we have discussed creating an “automatic tube hang” feature to be used in teleoperated once the drivers line up the robot to score.  Having this could potentially speed up scoring dramatically and also make it easier to score over übertubes.

Exhausted from a long battle with nearly 60 other FIRST robotics teams, Team 254 (The Cheesy Poofs) from Bellarmine College Preparatory emerged victorious at the San Diego regional robotics tournament on Saturday.

After going undefeated in all of their preliminary matches at the tournament, the Cheesy Poofs ran into trouble in the Quarterfinals when they inadvertently earned an immediate loss by red card after “damaging the field”. While slightly irritated, alliance Teams 987 and 3704 were overall very happy with the lightning agility of Bellarmine’s aptly named competition robot, Slipstream. Though the loss meant that Bellarmine would have to win the two remaining matches, driver Nick Eyre and operator Andrew Sides were confident in their abilities and the team, and were able to advance.

In the semifinal match, alliance Team 3704 received a red card after they were pushed into the opponent’s scoring zone, but polite conversation with the regional judges luckily helped to resolve the situation. Despite various obstacles, Team 254 won the regional competition, and as an added bonus took home the Kleiner Perkins Caufield and Byers Entrepreneurship Award. Presented for a well designed business plan, this award recognizes the aspects of robotics that do not focus on engineering. Walking away with two wins, Bellarmine robotics returns from a challenging weekend and looks optimistically forward to the Silicon Valley regional tournament.

After a late night last night of packing everything we needed, we are off to San Diego.

The San Diego Regional will be webcast here: http://www.team987.com/community/webcast.html

We will be scouting during the event using Cheesy Scout.

We brought the practice robot along on the bus so that we could work on programming and autonomous tuning on Wednesday night before the event. 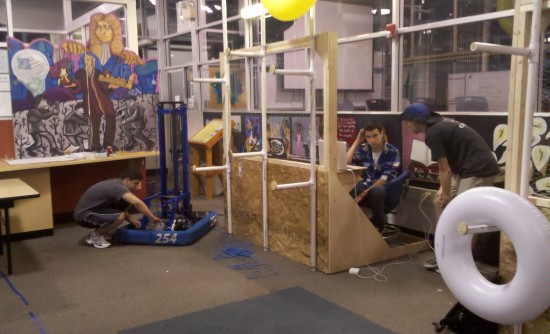 The programming team working on arm and elevator PID tuning.

The deployment is spring-powered and self-aligning.  The pneumatic release mechanism is not yet built so we are releasing by hand in the tests, but it is still completely spring powered.

The PR/Marketing team has been extremely busy; especially with post-build season material. On the award submission side, we have been working on KPCB (Kleiner Perkins Caufield & Byers Entrepreneurship Award), Chairman’s presentations, and pit presentations. Chris Campbell along with other students have been working extremely hard to complete the business plan and prepare for the presentations. Recently, they have calculated that the cost for all the publicity that we received for the T-Shirt Cannon, it would sum up to more than $300,000 (based on Google AdWord prices).

All students were asked today to read the chairman’s award submission.  Everybody should be very familiar with all the content in this submission (and lack of familiarity will result in consequences). In addtion, cheat sheets will be sent out to everybody in the next couple of days. All the information should be memorized before competition. The information includes robot specs, outreach events, t-shirt cannon information, and a little more. There will be quizzes on these so everybody is expected to know the information.

We recently conducted a food drive during scrimmage week and the results were HORRIBLE. We only got seven cans of food! This is terrible since everybody on the team went to the scrimmage. Attending this event was a requirement. The food drive is still going on, and I expect to see a lot more cans in the food drive bins in the next couple of weeks.

The robot has shipped and is on its way to San Diego. 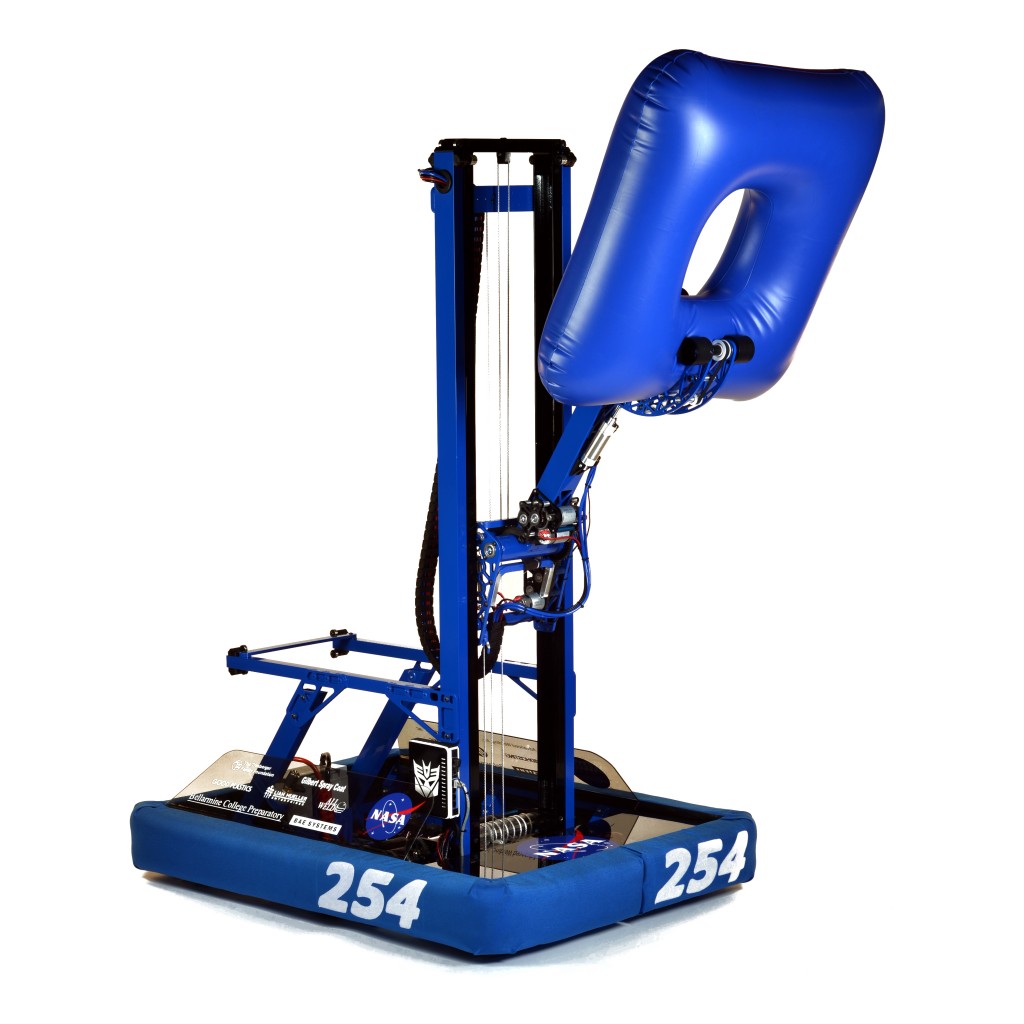 Day 45: The Day Before Ship

Today was the last day of build before the robot ships to San Diego.  We spent the day doing everything we possibly could to get the robot ready to compete.  After several hours of  chasing pressure leaks on the competition robot, we finally tracked down a leak in the regulator and got it fixed so that the robot will now hold pressure.  Furthermore, we finished the blue bumpers today so that we can get those shipped.  The Finance and Award Submissions Teams were also hard at work today on write-ups and the robot bill of materials which must be finished before competition.  Finally, we did a robot photo shoot with the robot on seamless white paper.  Photos need to be edited but will be up in the next few days.

Tomorrow, we will ship the robot and bumpers.  We plan on withholding the carriage/arm assembly and the minibot deployment system (not yet built) and bringing these to San Diego as part of our withholding allowance.

Today, we got the practice robot up to the point that the competition robot got to yesterday and ran some driving tests on the field.  It scores well.

After a very stressful period of the field shipment being delayed, it finally arrived at about 1:30PM on Saturday, Day 43.  We immediately started assembly and had it just about done before dinner time. 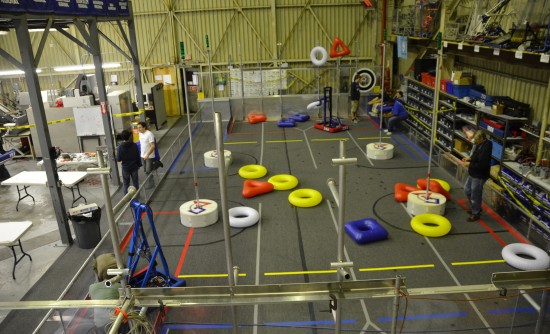 Both us and our sister team, 1868 have been finishing up our robots.  Today, 254 ran its first tube test and scored several tubes on all rack locations after loading tubes from the ground and the human player.  The scoring mechanism works great but the elevator and arm need some additional programming to increase controllability. 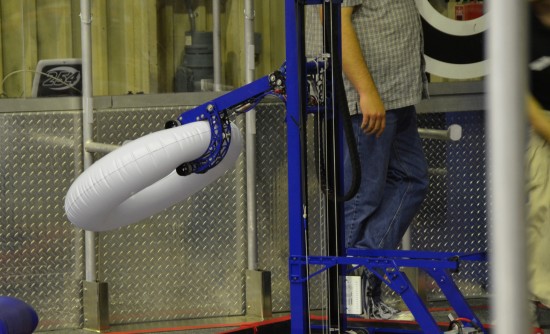