This past week, we attended the FIRST Robotics Competition Championship in St. Louis. With two Championship events this year, it was hard to decide which to compete at, but we had a great time facing off against teams from the east coast, Canada, and more. Alongside, Team 2767 Stryke Force, Team 862 Lightning Robotics, and Team 1676 The Pascack PI-oneers, we were able to win the Daly Subdivision finals before continuing on to win the Championship at Einstein. 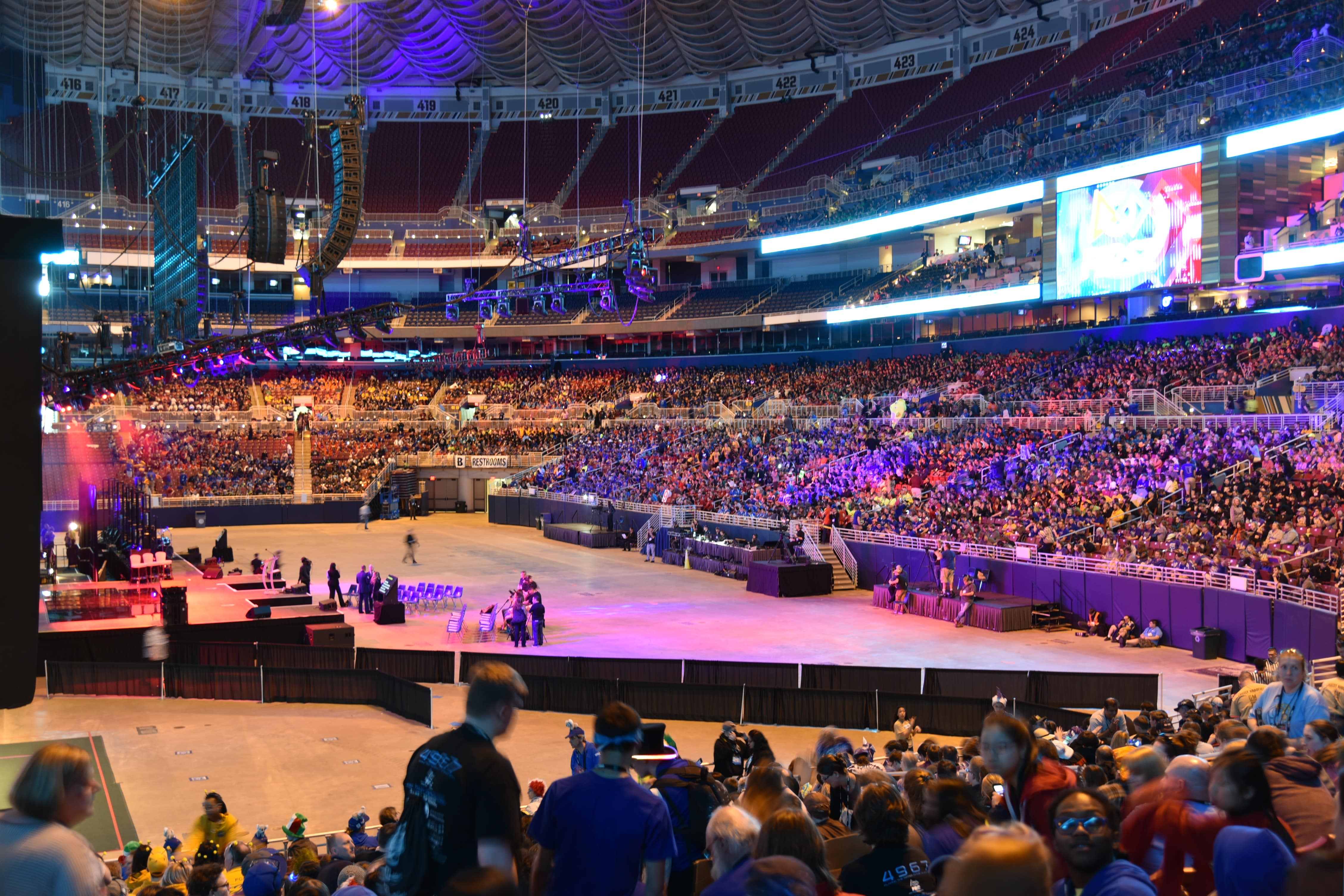 In our qualification matches, we went 7-3 overall and seeded second, with Team 2767 holding first seed. The improvements we made since the Silicon Valley Regional payed off as we hit over 100 kPa during our second qualification game and managed an average of about 381 points per match. Throughout qualifications, we were also regularly able to achieve 40 kPa and activate 4 rotors, giving us enough ranking points to propel us into a high seed.

Moving into alliance selection, we joined Team 2767 alongside Team 862 and Team 1676. With a balance of gear and fuel scoring ability, we planned to maximize our points by hopefully achieving 40+ kPa and activating 4 rotors every match. Throughout the Daly finals, we remained undefeated and won against incredibly fierce competition. In our first semifinals match, we managed to score a personal record of 550 points! We were also very grateful to have received the Innovation in Control Award, an award we had also received back at the San Francisco Regional. After winning Daly with some very close matches, we were anxious to see how we would perform at Einstein. 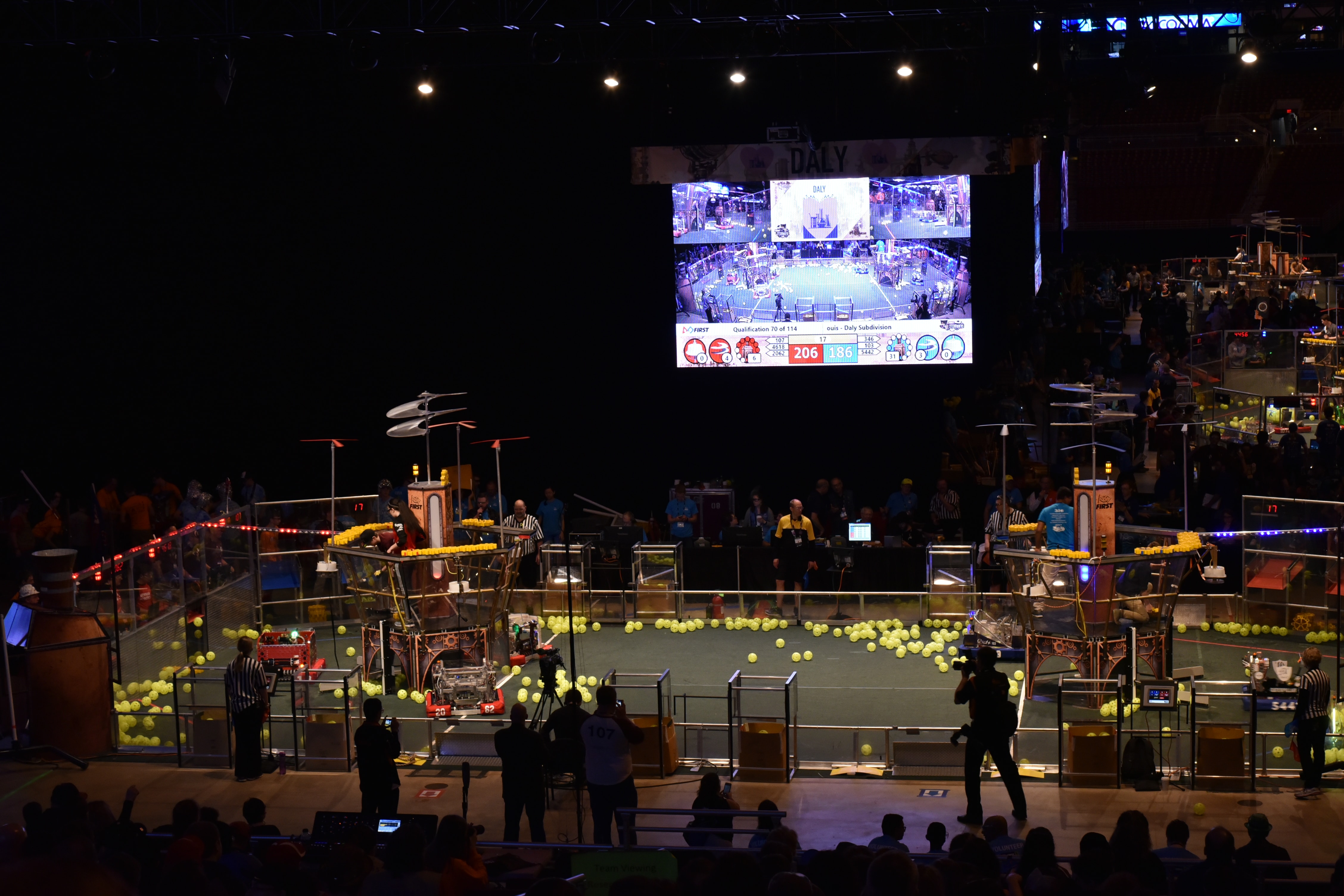 In a round robin style tournament, we competed against every other subdivision champion throughout 5 matches. We ended up going 3-2 here and seeded second, giving us the opportunity to compete in the grand finals as the blue alliance against the Darwin champions, who had beaten us in the round robin tournament.

In the most intense games we’ve played all season, our alliance pulled ahead in the finals, winning the second match by only 3 points. We’ll let the video speak for itself, as the second finals match was certainly many on 254’s favorite game of the season:

We are so grateful to our alliance partners for playing such a huge role in our success, and to every team that attended the Championship for competing with us and making it such an amazing experience. Special mention to the Einstein teams for going all the way and challenging us in ways we hadn’t previously been. We’re looking forward to facing off against the Houston alliance at the Festival of Champions! 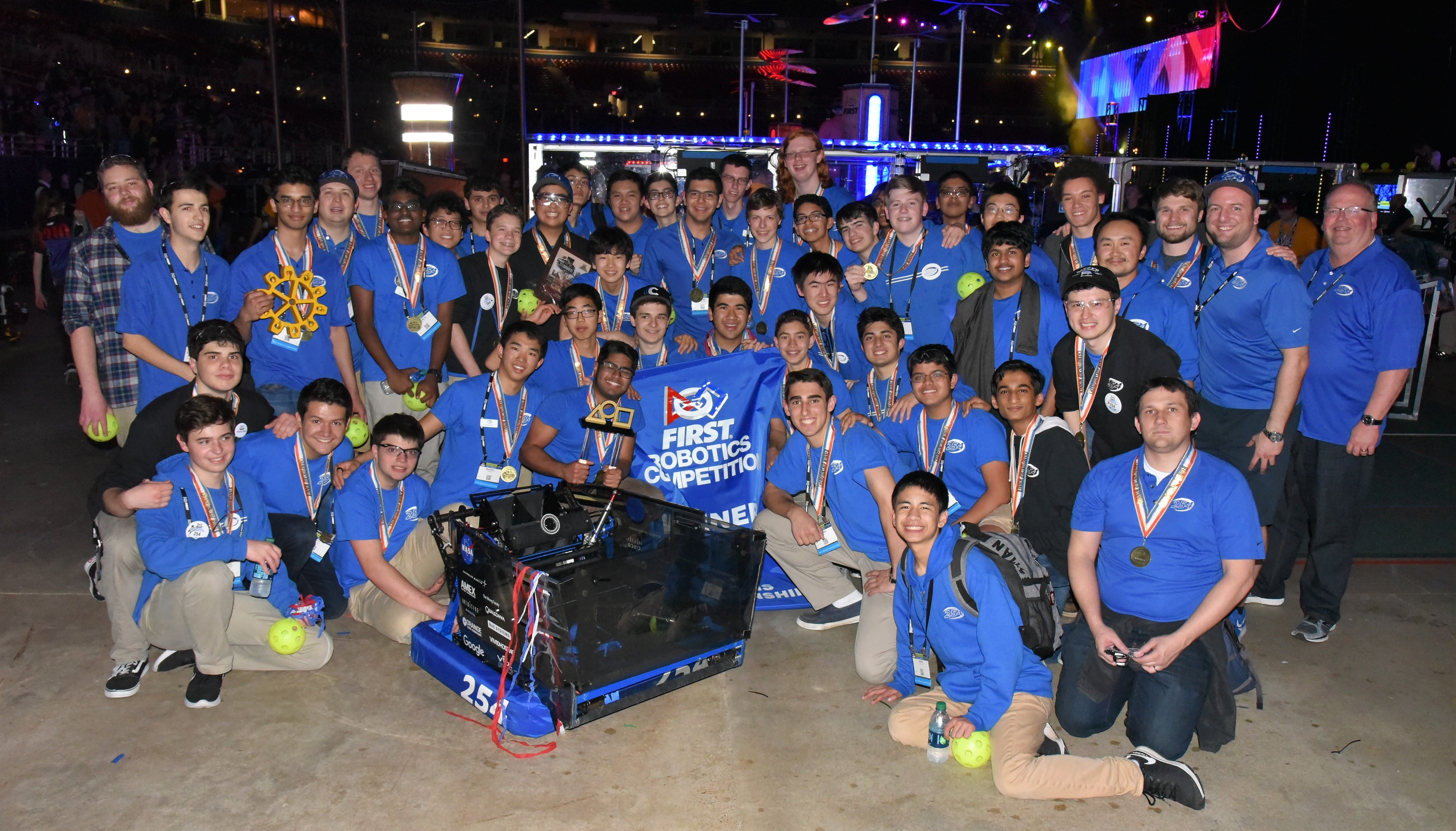 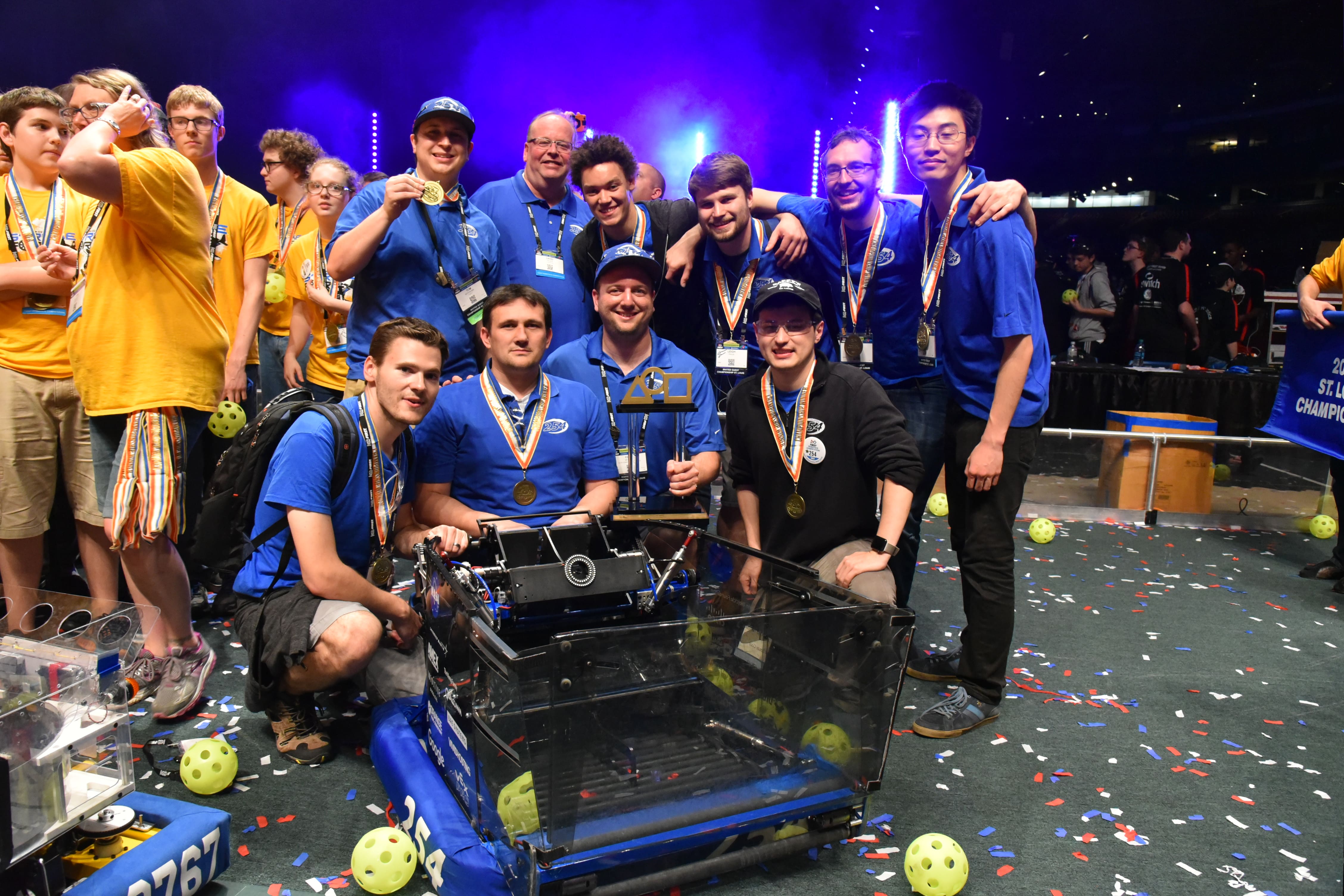 “Thanks to our mentors for such a great season!” 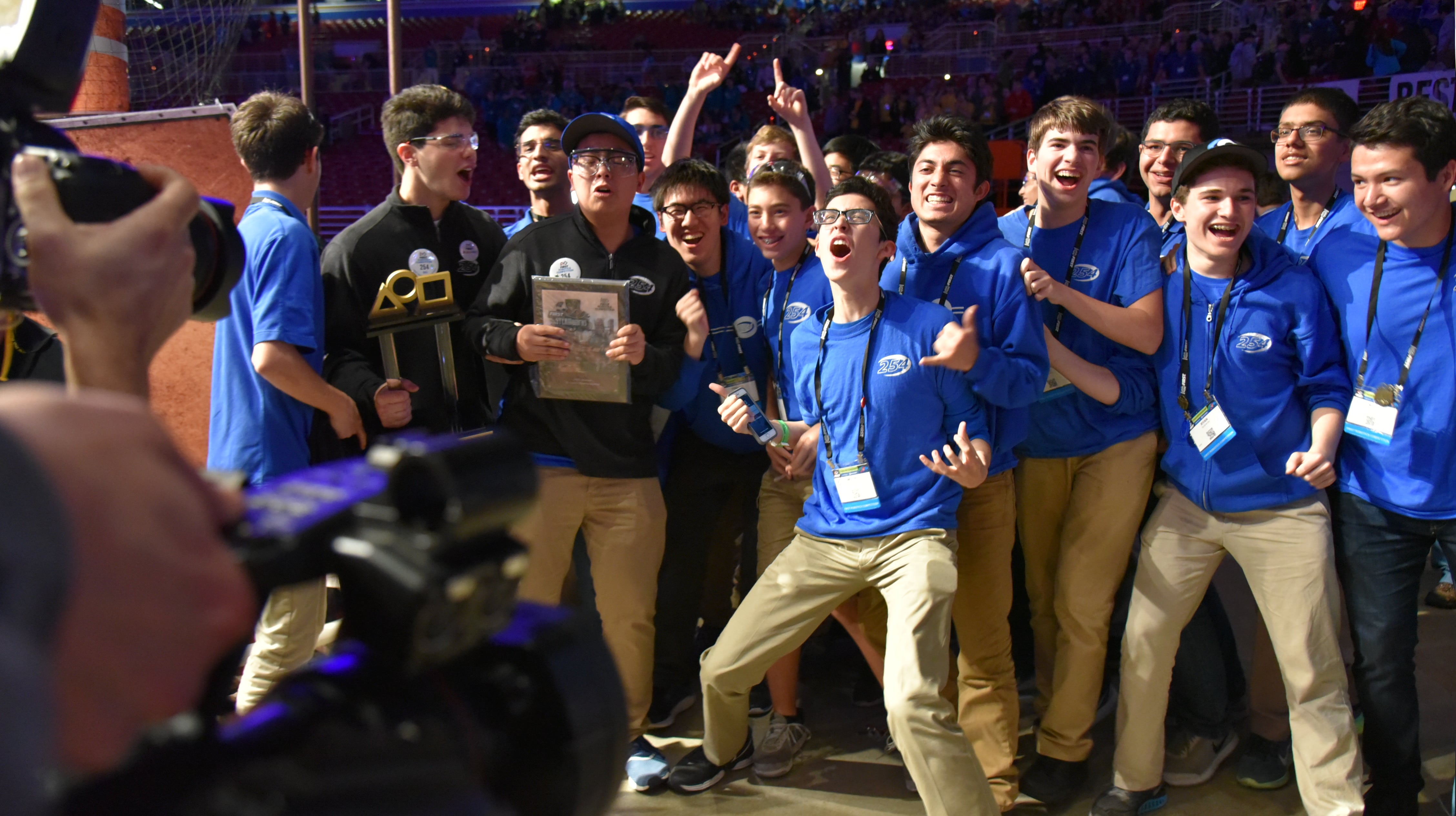