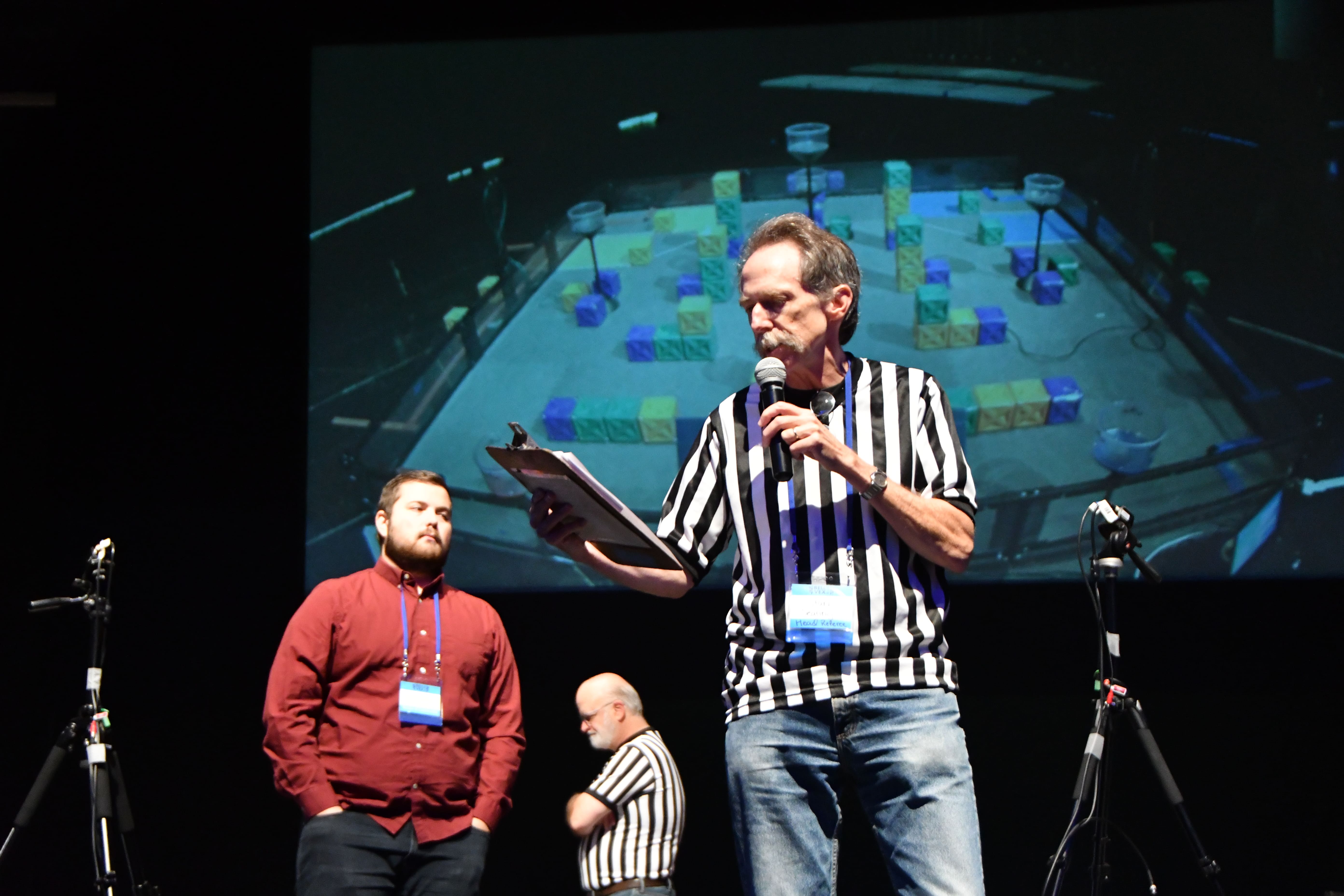 Overall, the tournament ran smoothly, we had no major hiccups throughout the event and everyone seemed to have had a great time. Our teams saw varying success, as our VEX teams D, W and F made it to eliminations. This event had many firsts for Bell Vex History, to mention a few, this was the first to have a Bell Vex Logo, and the first to have live scoring. 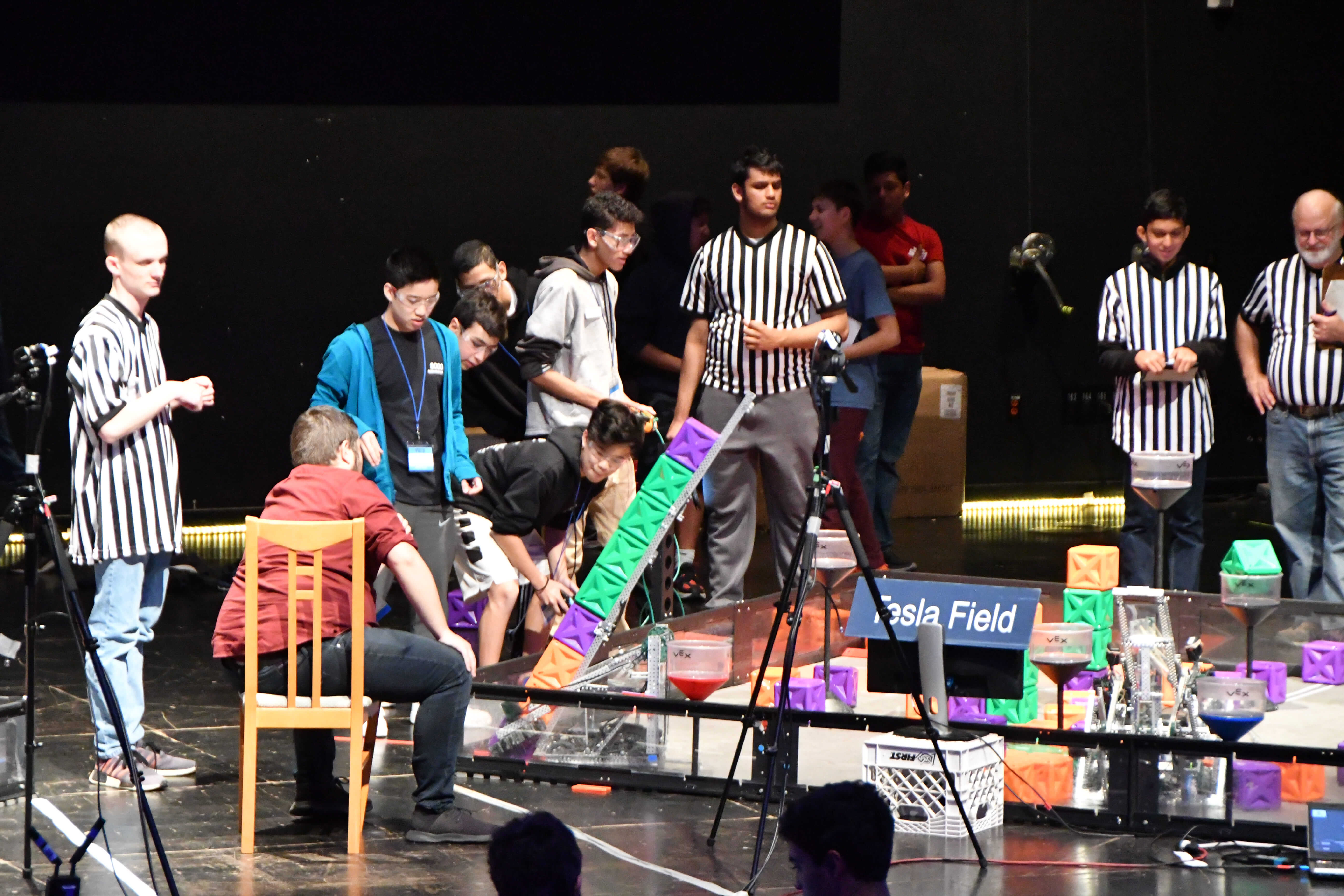 Throughout the tournament 254B was struggling with many issues. Most of the issues stemmed from connection and software issues. The robot’s hardware performed well, but not being able to control the hardware lead to this team’s demise. Unfortunately, this team placed last in the tournament. But, it was a great learning experience for the team.

This team was also struggling with various software issues, their automatic positioning system was not working according to plan, leaving them to recreate their autonomous routes throughout the tournament. They were also having trouble getting their massive tray to deploy properly. Ultimately, they ended up near the bottom of the rankings. Because of their past success, 254W chose to pick them as their alliance partner, but lost in the round of 16.

During the qualification matches, the robot performed really well, we were able to slow down the other teams with our very defensive robot. The six motor drive base really helped us push through all the cubes and defend very effectively. Our new and improved arm allowed us to be the fastest team at scoring cubes into the towers while also being able to stack cubes reasonably quickly. We ended up ranked in 7th place and we made it all the way to semifinals.

This team had won 4 of 6 qualification rounds and placed in 20th after qualification rounds. Their new intake design was not working according to plan, causing them to focus on tower control instead of their designed purpose, cube stacking. Fortunately this worked out for their benefit, this team became ranked 23th and decided to choose 254D as their alliance partner. They then lost in the round of 16.

Throughout qualification matches this robot struggled quite a bit. Resulting in 2 wins and 4 losses, this team placed in 45. They had issues stemming from their lift and intake. These issues resulted in slow intake speed and an inability to score very quickly or in high quantities. 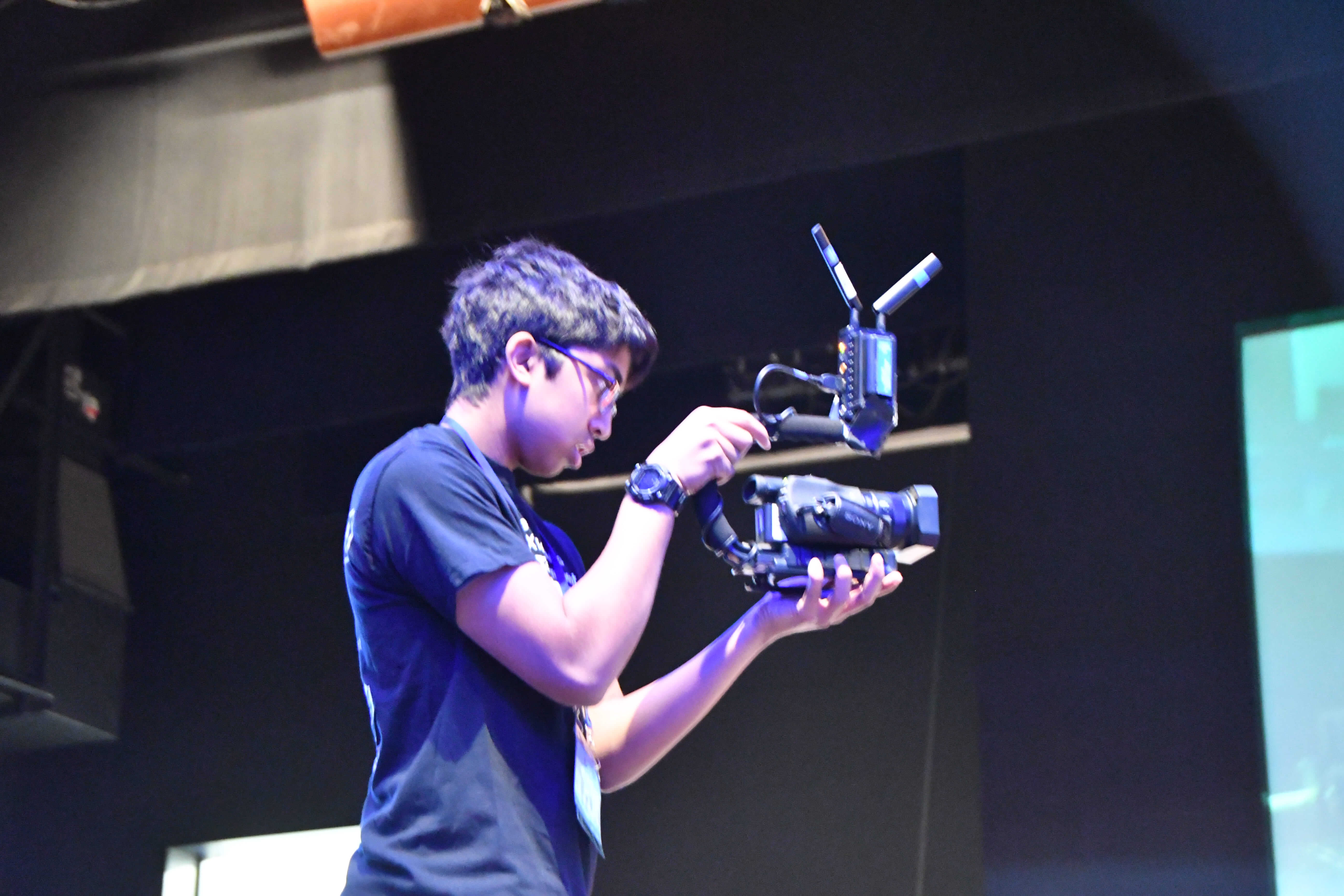 At Bell Vex, we would not have been able to be so successful without the amazing teams that attended the tournament. We would also like to thank all the volunteers and judges that made this tournament an exciting experience, and all of our mentors, teachers, and parents who helped run the tournament smoothly. 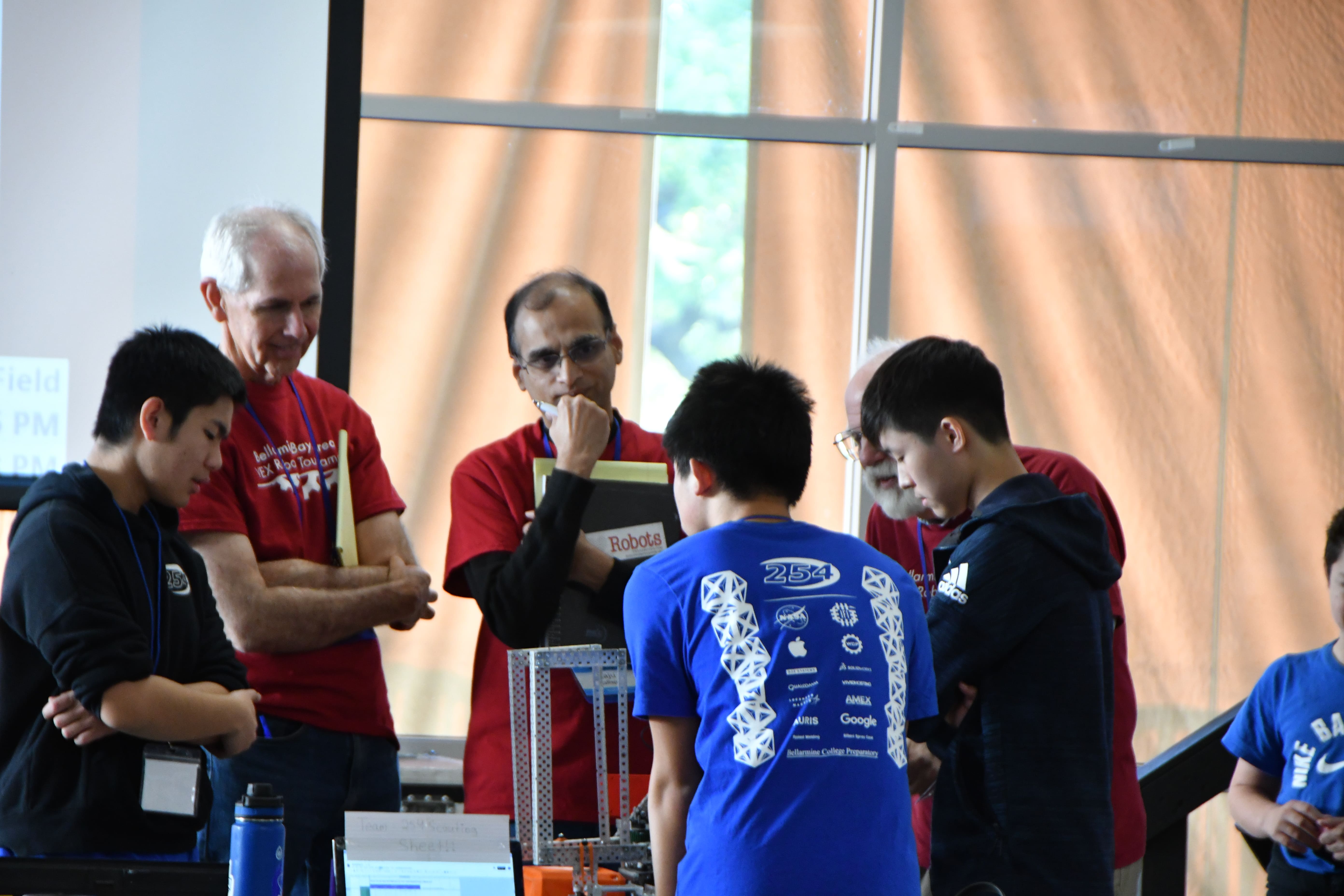 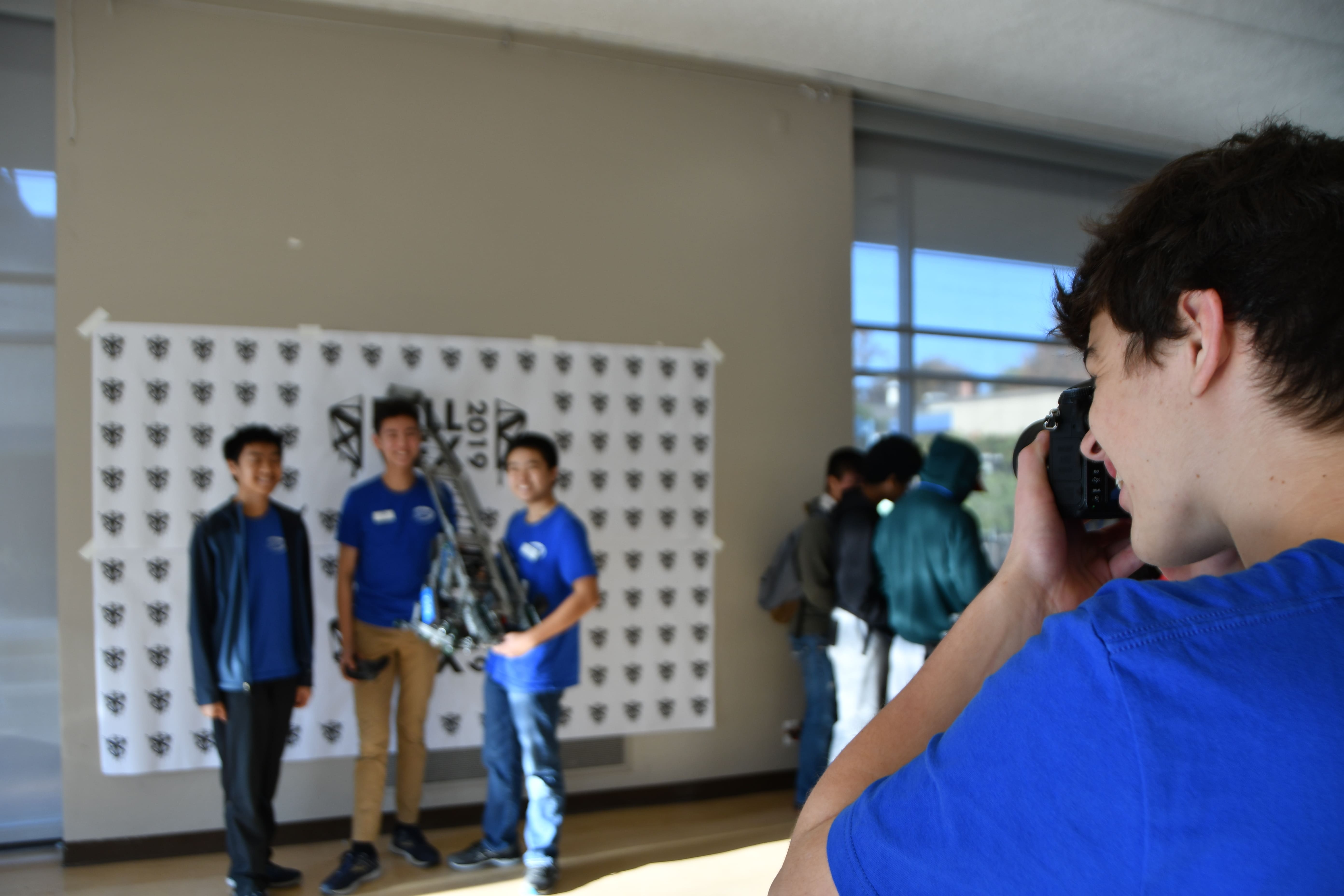 This past weekend, we attended Madtown Throwdown, an annually hosted offseason tournament hosted by Team 1323 (Madtown Robotics), in Madera, CA. We had a great time jumping back into action with our robot, Backlash, before the start of the 2020 FRC Season. Shoutout to FRC Team 1323 MadTown Robotics, FRC Team 1678 Citrus Circuits, and FRC Team 971 Spartan Robotics, for winning the tournament! 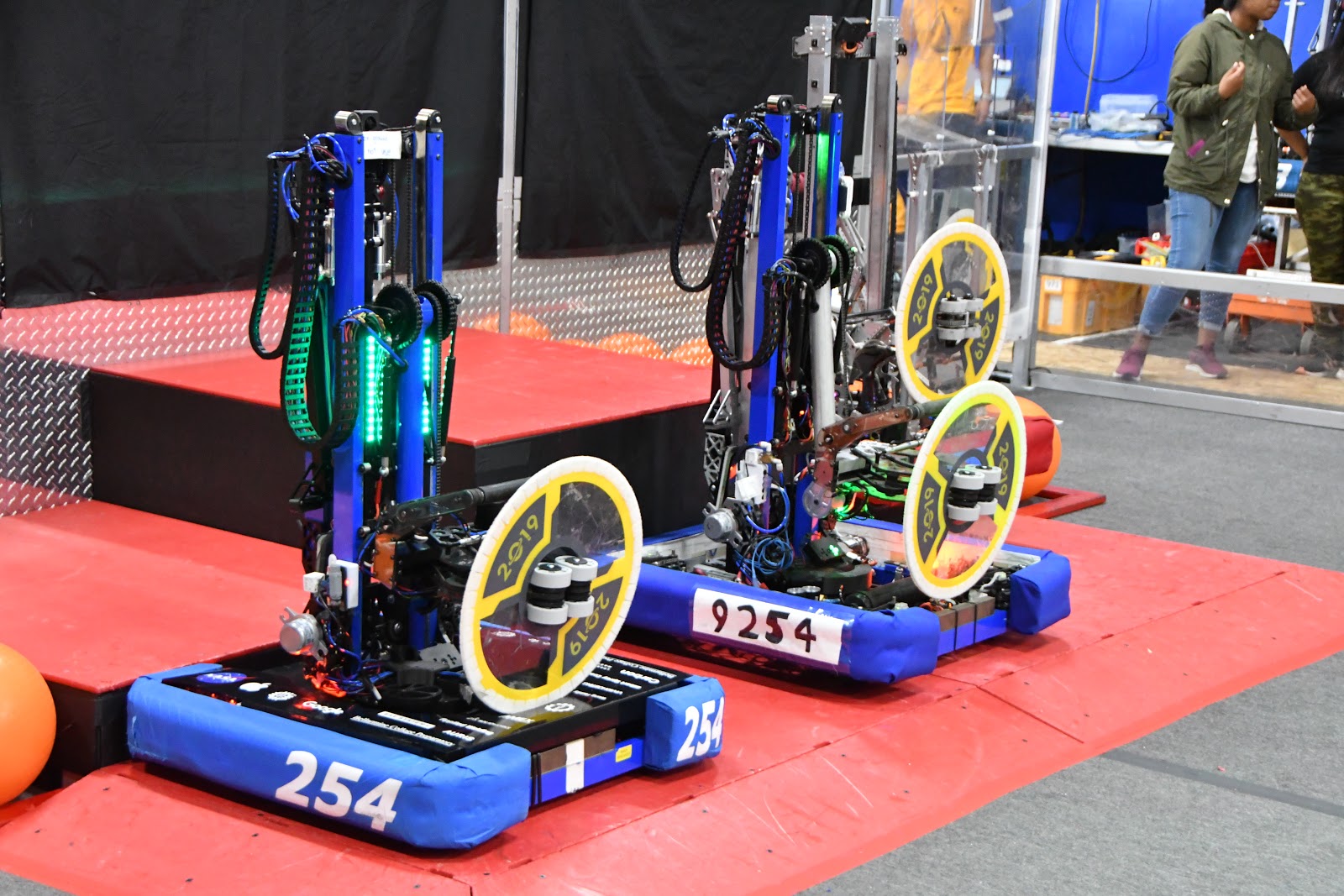 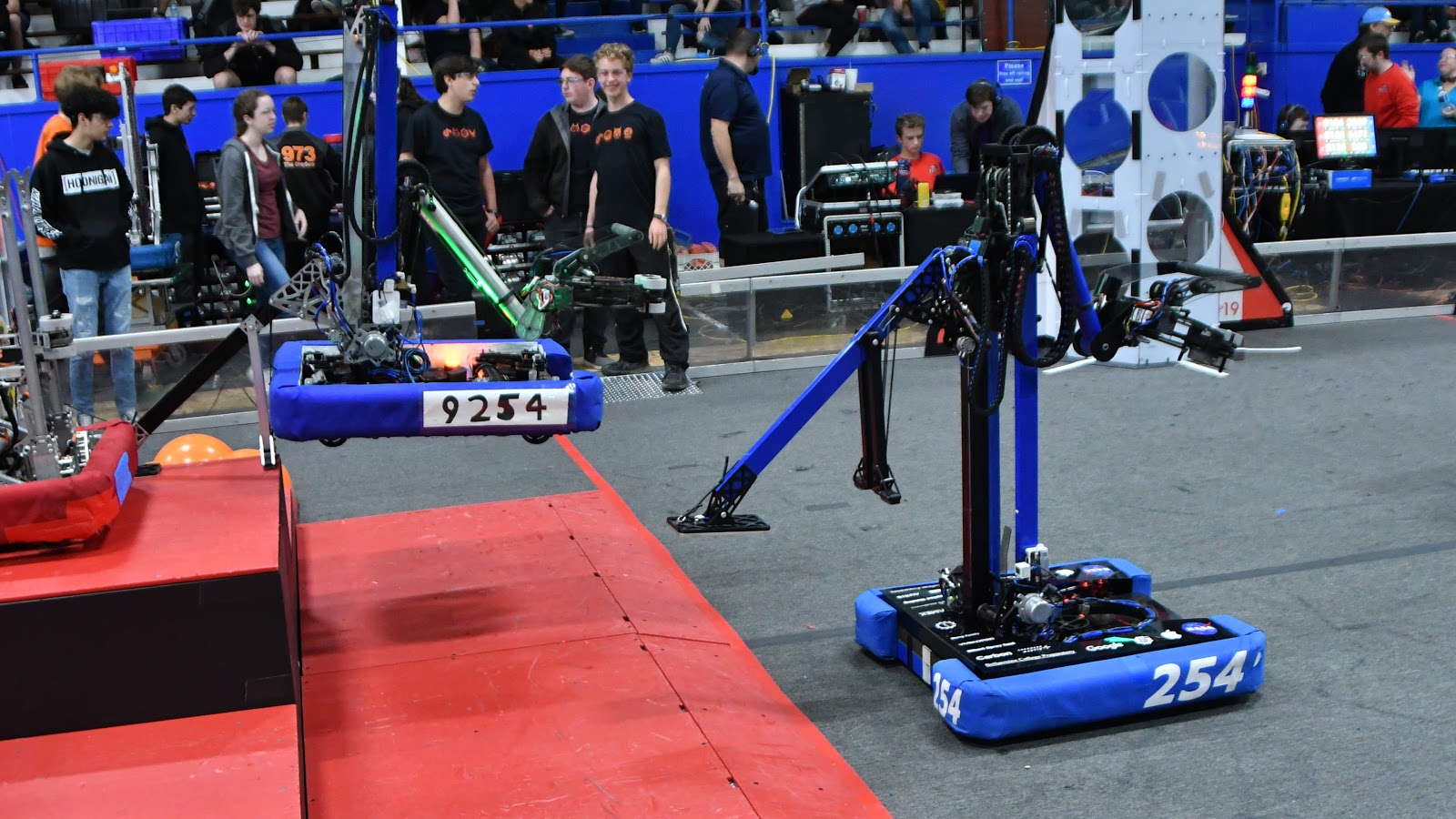 Throughout our qualification matches, we sought to earn the maximum number of ranking points, which meant prioritizing scoring in the rocket in every match to get the rocket RP, as well as climbing and scoring enough points to win. We employed a new rocket RP scoring style that allowed us to utilize our partners well. Since the opposing defense was much better at Chezy Champs, we focused on the top two levels of the rocket and let our partners score on the first level. The HAB RP was a bit harder because of the increased point requirement. Thus, we made sure to always climb successfully and also get our partners to park on the platform. We consistently scored double climbs in our matches.

By the elimination period, we focused on simply winning our matches. We scored as many points as possible by scoring as many cargo balls as possible since they were worth more than hatches. We wanted to score enough hatches such that we had multiple points to score at any moment and avoid getting caught up by defense. We ran our cargo ship autonomous program to place hatch panels on the first two side slots of the cargo ship and then filled the rocket during most of our matches. Sometimes, we switched between the task of scoring hatches and cargo with our alliance partners to confuse defensive opponents.

Going into the elimination period, we formed an alliance with Team 1323 MadTown Robotics, Team 4698 Raider Robotics, and Team 6174 Kaprekar’s Constants. 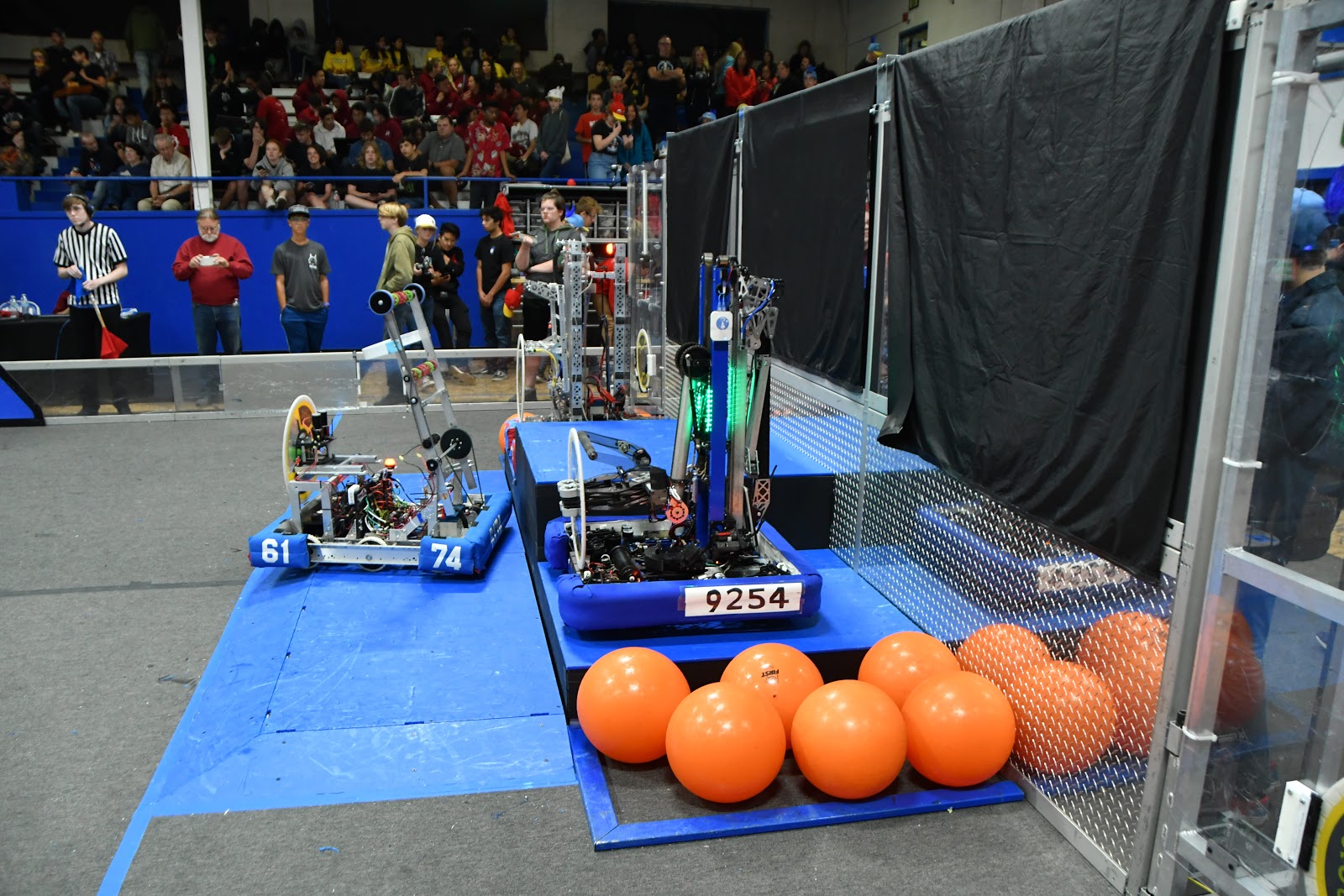 Our swerve bot on the HAB zone before an upcoming match

Going into the elimination period, we formed an alliance with Team 1662 Raptor-Force Engineering, Team 5104 BreakerBots, and Team 2135 Presentation Invasion. 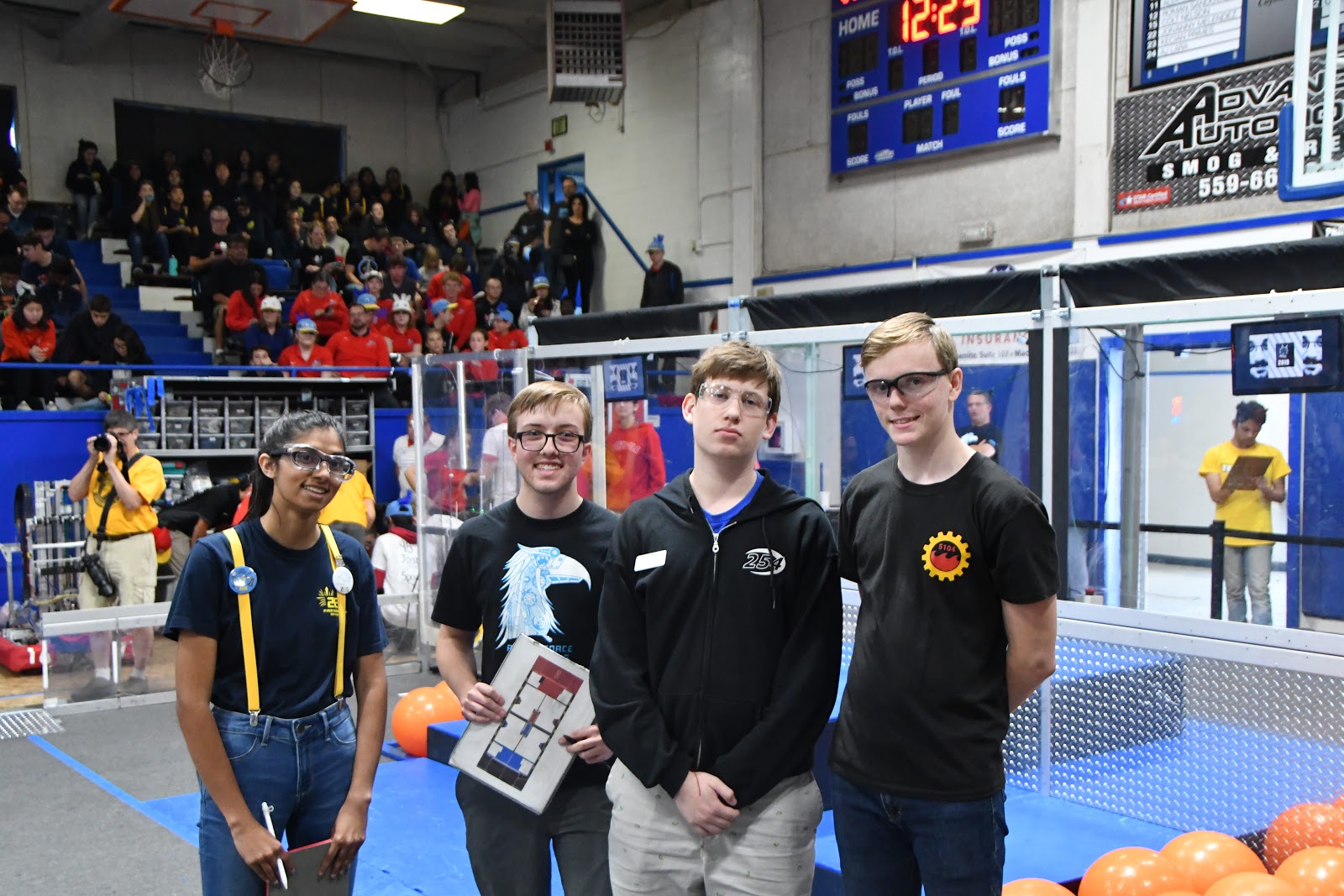 At Madtown, we would not have been able to be so successful without the amazing teams that we were able to work with during our matches. Also a special shout out to our pit crew and drive team for properly maintaining our robot during the tournament. We would also like to highlight the efforts of our alliance readiness crew to keep our alliance partners ready throughout the tournament. Team 254 would also like to thank all the volunteers and judges that made this tournament an exciting experience, and all of our mentors, teachers, and parents who supported us and helped us succeed in this tournament. Special shoutout to Team 1323 MadTown Robotics for making this event possible. 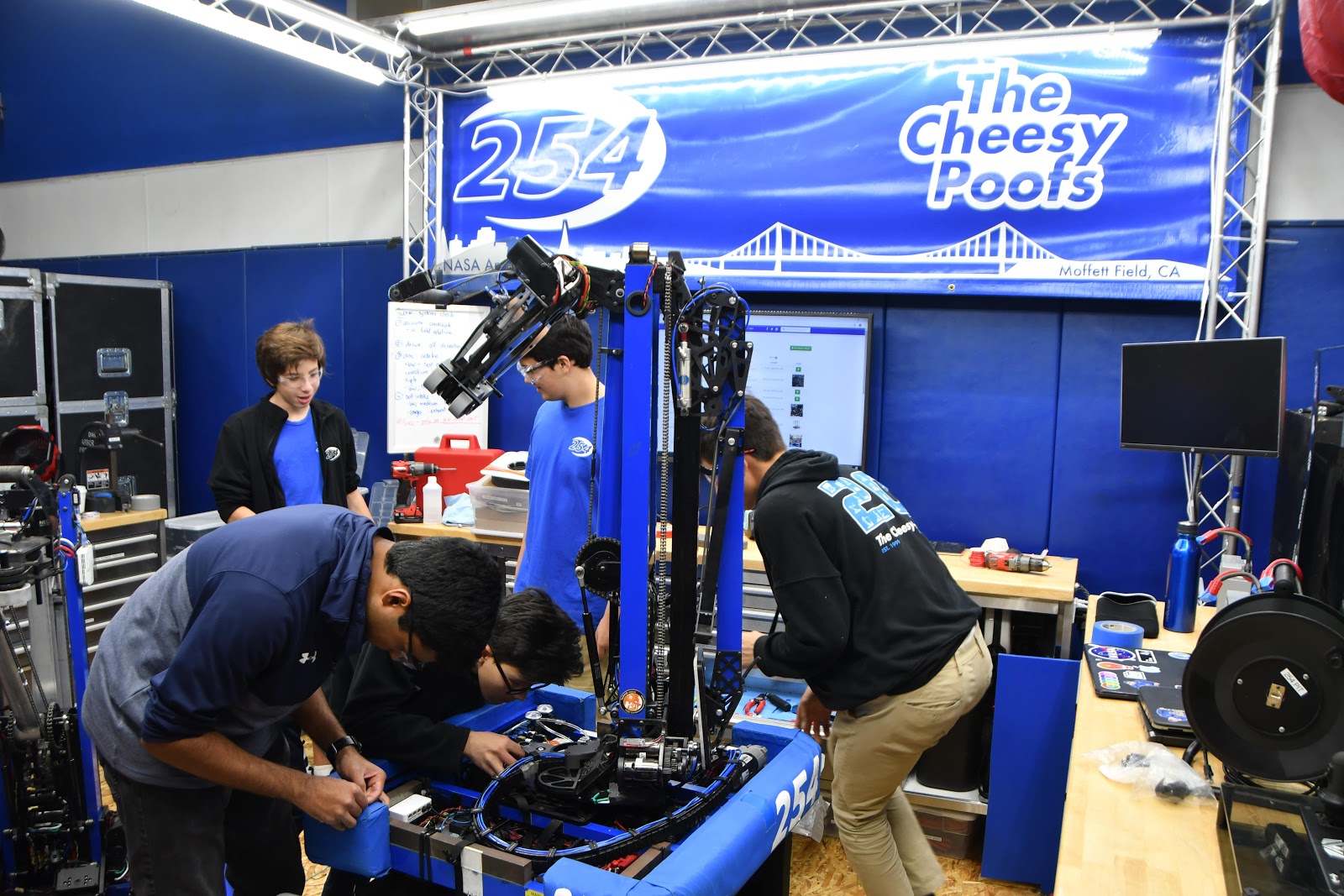 The Team 254 pit crew in action 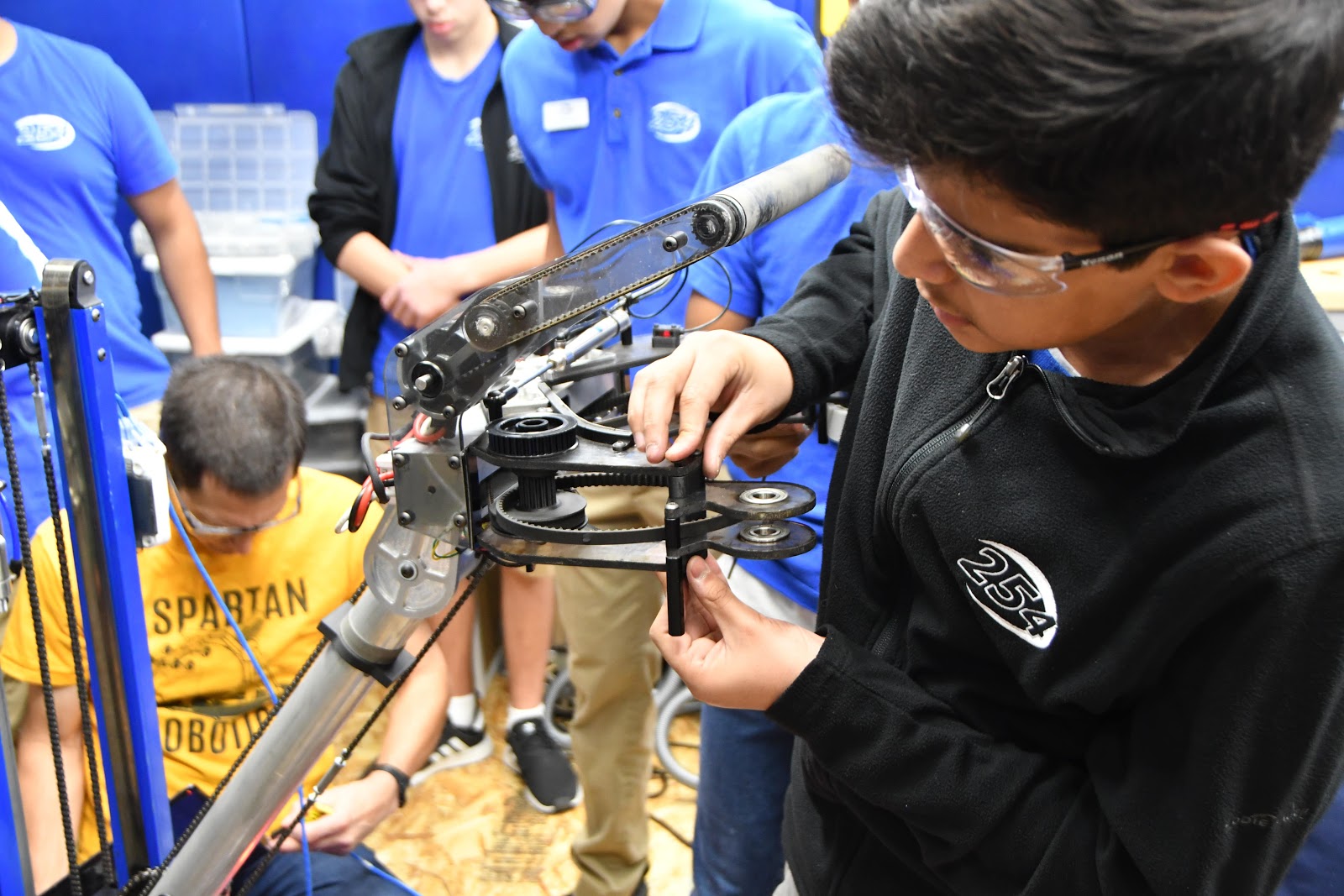 254 member, Safwaan Khan, in action as a pit crew member