This past weekend, from Tuesday until Saturday, we participated in the FIRST Robotics Competition World Championships in Saint Louis, Missouri. On Tuesday, a smaller group of students left early to set up the pit and make sure everything would be set up for when the rest of the students arrived on Wednesday. We were placed into the Newton division, and with Team 1241, Team 1731, and Team 708 we played some great games in eliminations, but unfortunately were eliminated in the subdivision finals. 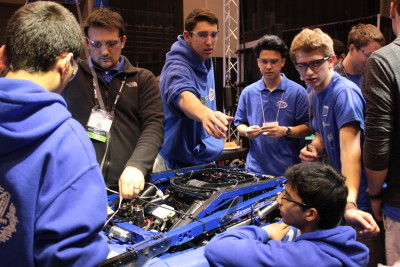 On Thursday and Friday, we played 10 qualification matches across both days, and earned 9 wins and 1 loss throughout those games. In qualification match 100, we even managed to push a disabled robot onto the batter, securing us an extra ranking point and winning us the game with a final score of 140-139. The qualifications overall went well for us, as we earned 35 ranking points and ended up as second seed going into eliminations. 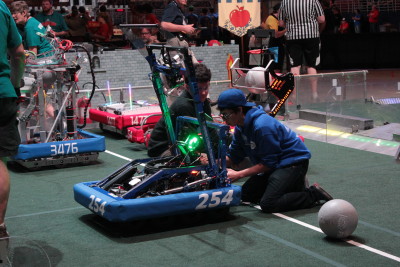 Saturday opened with the alliance selections, and we partnered up with the first seed team, Team 1241, Team 1731, and Team 708. With this alliance we hoped to consistently score highly while preventing the opposing alliance from having free reign on their side of the field. This strategy seemed to work out throughout our quarterfinal and semifinal games, with us scoring around 240 points in most of those games. In fact, we scored 254 points in our second semifinals game excluding foul points; however, a red card on our alliance prevented our score from being recorded that game. Moving into the finals, we matched up against an alliance including Team 217, Team 4678, Team 3476, and Team 188. Although we played hard, we were eliminated from the tournament in the Newton finals.

In the end, we would like to congratulate Team 330, Team 2481, Team 120, and Team 1086 for their success in winning the FIRST Robotics Competition World Championships. Additionally, we are proud of Team 987’s achievement in earning the Chairman’s Award, cementing them as a Hall of Fame team. Overall, we are extremely grateful to have had the opportunity to interact and play against many great teams at the Championships and hope to do even better next year. 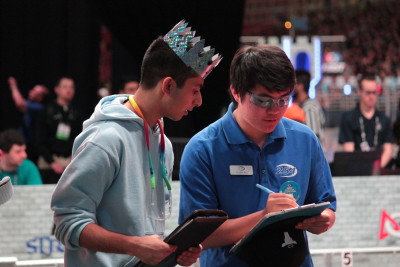 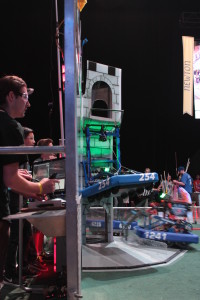