Today was the first day of the FRC build season. The new game, FIRST Steamworks, was revealed, and we began evaluating strategies and testing prototype mechanisms for our 2017 robot.

The game manual and rules are linked below. All team members should familiarize themselves with the manual, especially the Match, Game and Robot sections.

To evaluate potential strategies for our team, we estimated times to perform tasks such as picking up and depositing gears, collecting balls, hitting hoppers, etc. We then compared that time to the point value of each task to determine a priority list of items to prototype as well as to begin match strategy.

For 2 strong robots working together in eliminations, an optimal strategy could be to each perform a 2 gear autonomous and then in teleop do 2 “hybrid cycles” in which they each score both a round of 100 balls and a gear followed by 2 “ball cycles” where they score only balls. This would produce a maximum score (assuming 80% shot accuracy) of 410 points. Perhaps the third robot could play defense rather than contributing offensive points.

More information on this strategic analysis can be found in this spreadsheet.

Today, we started by prototyping various mechanisms to accomplish each of the tasks in the game. Later, we will work to evaluate the prototypes, determine which are most promising, and integrate them together for more comprehensive testing.

We discussed creating a shooter which can shoot a large number of balls very quickly (goal is 50 in 1 second). This will need to be designed, built, and tested in the coming week.

We made a prototype for the vertical flywheel by modifying the hood of dropshot. We found that the shots often were inconsistent depending on the orientation of the wiffle ball holes. 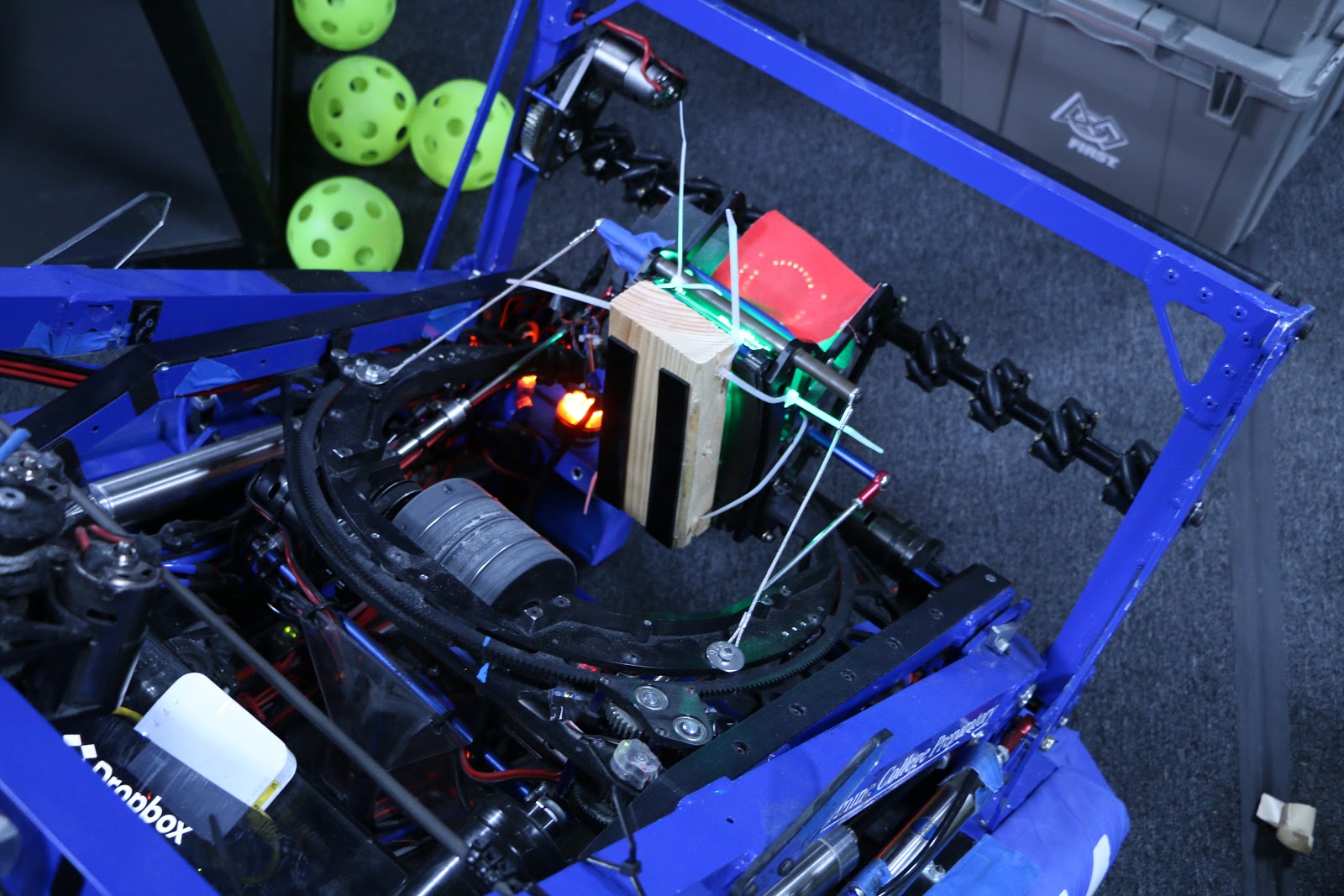 Single Wheel Vertical Flywheel – front spin – We reversed dropshot and tilted it backwards to use the same flywheel but give the balls front spin instead of backspin. The balls still veered and had the same problem as backspin

Double Wheel Horizontal Flywheel – This looks like the most promising prototype we have so far. It reduces spin on the ball to minimize the wiffle effect on trajectory. We are going to change this to a vertical double flywheel so that we can lengthen the wheel and shoot multiple balls side by side. 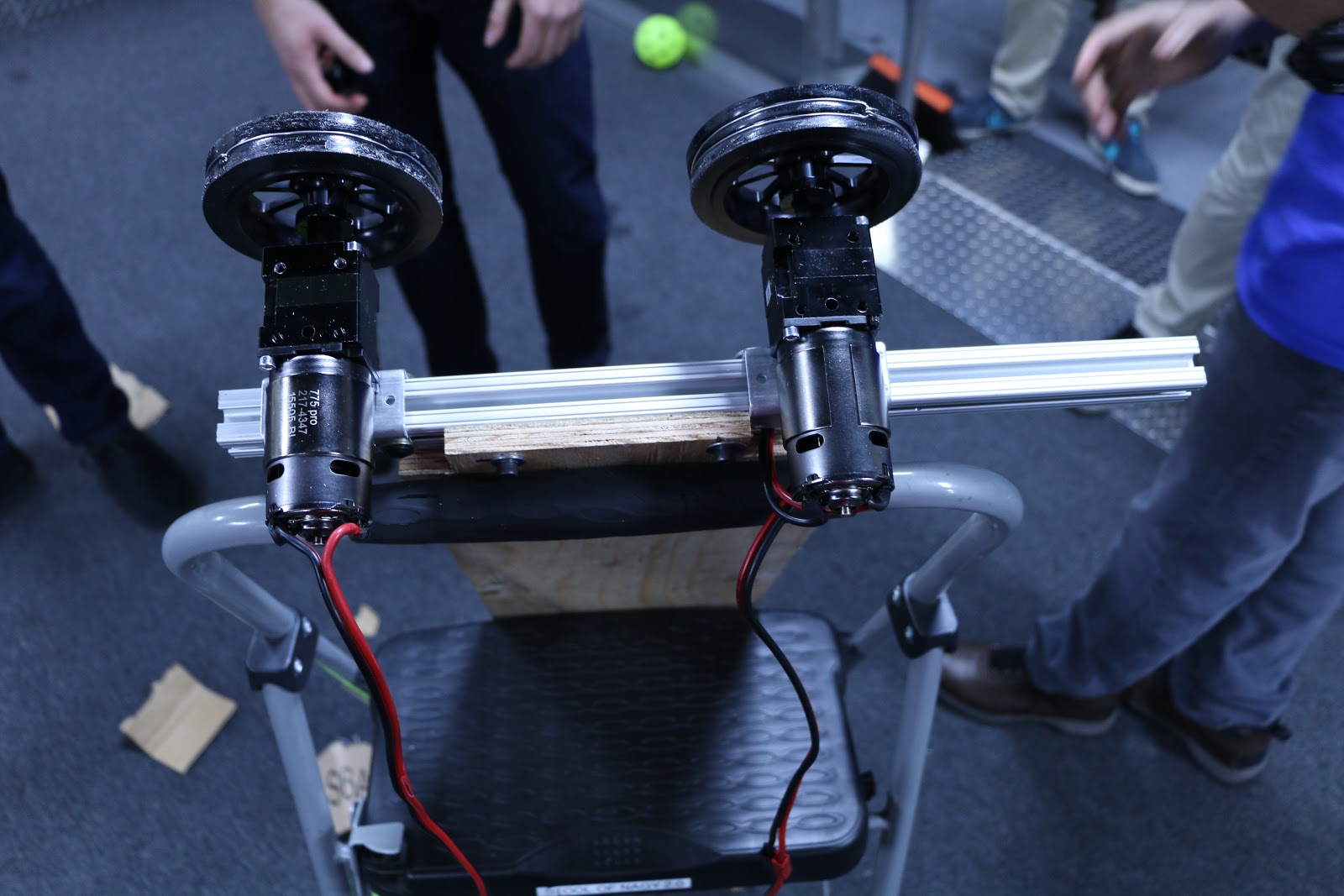 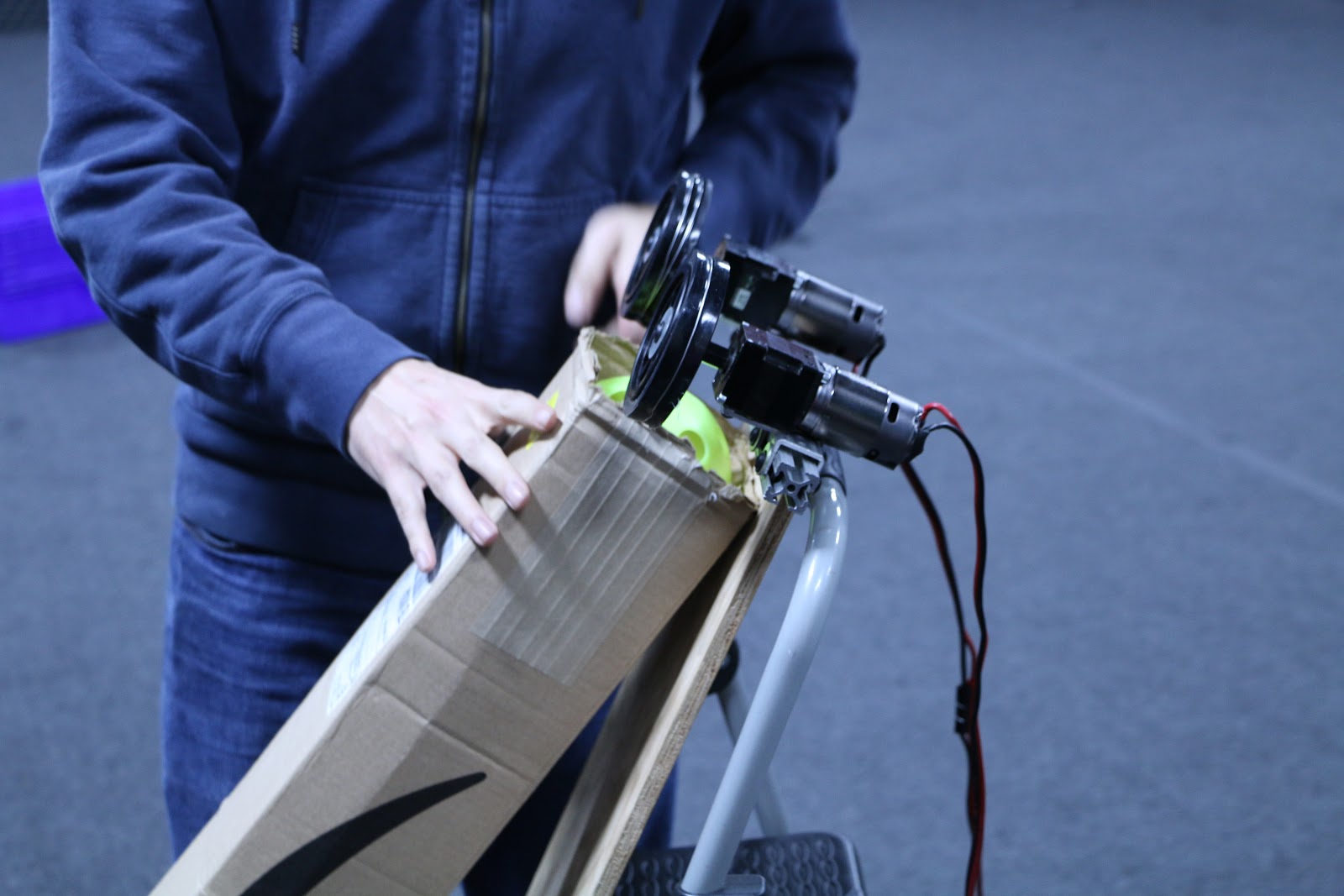 Ball Intake – The preliminary plan is to have the bumper not at the limit of the maximum size so that we have room to deploy an intake in front of the robot (past the bumper, but within the maximum size). Although we could have a bumper gap, the maximum gap is about 14” and this setup would allow us to intake the full width of the robot which could be much faster and easier. It has been modeled in CAD and laser cut, but we have yet to assemble the prototype.

Catapult – A prototype was started for a spring-powered catapult shooter. This prototype needs some additional work to determine feasibility.

Hook – We prototyped a one-way latch that is latches into one of the holes in the gear and then is pulled back into the robot to hold the gear with friction. This could then be actuated to tilt up and down to move from a floor-loading position to a hanging position. We made a new version with two hooks to allow for more misalignment when picking up the gears on the field.

Claw – A second prototype was built with two motorized wheels which intake the gear off the ground. The wheels are mounted to sprung arms which open around the gear as it moves in. It seems to work, but the quick prototype has the wheels spinning too quickly. We are going to work on slowing it down.

Drivebase – We have tentatively ruled out any sort of strafing drivebase because we don’t think it will be necessary. We will most likely use a 6-wheel or 4-wheel drive robot, as the team has high familiarity with these designs and should be able to construct them effectively and quickly. We are currently working on evaluating the best wheel configuration to have the ideal maneuverability by adapting Deadlift’s (2015 robot) drivebase with different wheels. We ran into some minor issues with radio connectivity, but we plan to fix this by using a newer radio. We need to finish the prototype. 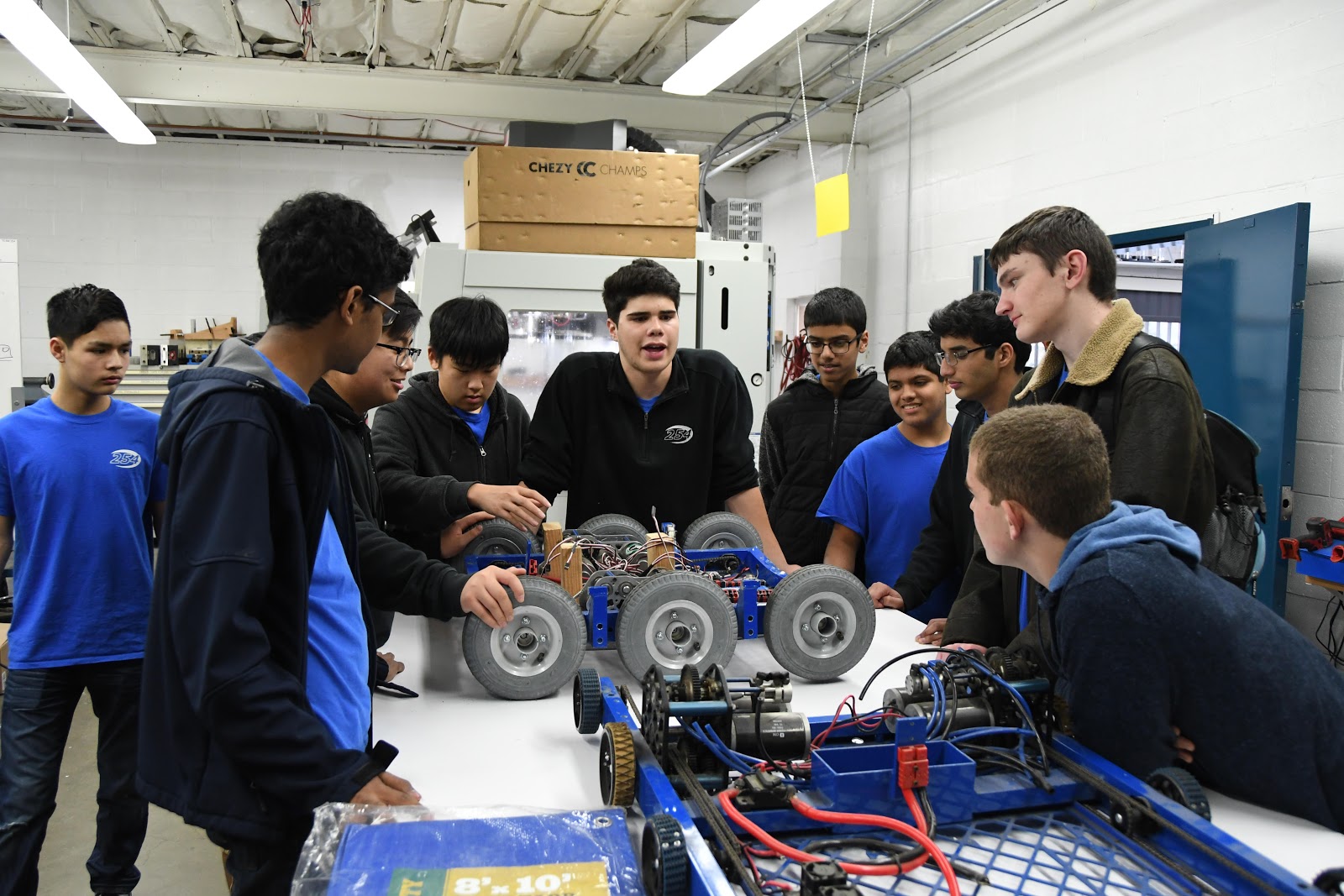 Comb prototype – We discussed using a custom rope for hanging, likely a narrow, strong rope (like paracord) with knots. This prototype uses a comb-like hook to grab the knots and reel in the rope to pull up the robot and hang. We have tested it passively, but have yet to determine if it can support a robot’s weight.. There is still lots of work to be done, especially in optimizing the shape of the comb / spool so that the radius does not change too much as it rotates (necessary for gearing optimization).

We started programming this season by creating a private code repository on Github based off what we did last year. We then started working on our demo boards, imaging them with the new 2017 firmware and installing driver station software to them. We also began experimenting with a Pixy camera for vision tracking. It seemed promising and easy to configure, but it didn't communicate easily with the roboRIO so more work is needed.