Today, we finished the 4" Fairlane Single Wheel Backspin Prototype that we started on Saturday. We tested for the entirety of the build and received great results. While single shot accuracy was consistent, when we started pushing in balls at a higher speed, we found that the shooter was somewhat inconsistent. In exploring other options for more consistent feeding, (and by consequence shooting) we decided to change the VersaPlanetary gearbox running the polybelt feeder from a 5:1 gear ratio to a 1:1 ratio. We found this speed to be much more efficient. At the end of the night, without pushing the balls (so solely gravity fed), we managed to shoot around 25~ balls. After missing the first shot or two, we managed to make every subsequent shot. While this only shot at around 2-3 balls per second, it is a first step towards proving our design. We found the precision to be incredible, but more importantly the rate of fire was impressive! This was most likely due to the extra mass of the wheel resulting in inertia to counteract fluctuations in rotational speed as balls compress against the wheel. We began making a second iteration of this prototype in an effort to put it next to the previous working one. We would then shoot them in the same direction and verify that two shooters side by side is a feasible option for accuracy and rate of fire. We finished laser cutting the new parts, acquiring the materials, and sorting out all the tools. We only need 2 more 3:1 VEX Planetary Gearboxes, and then we can assemble the prototype and test. 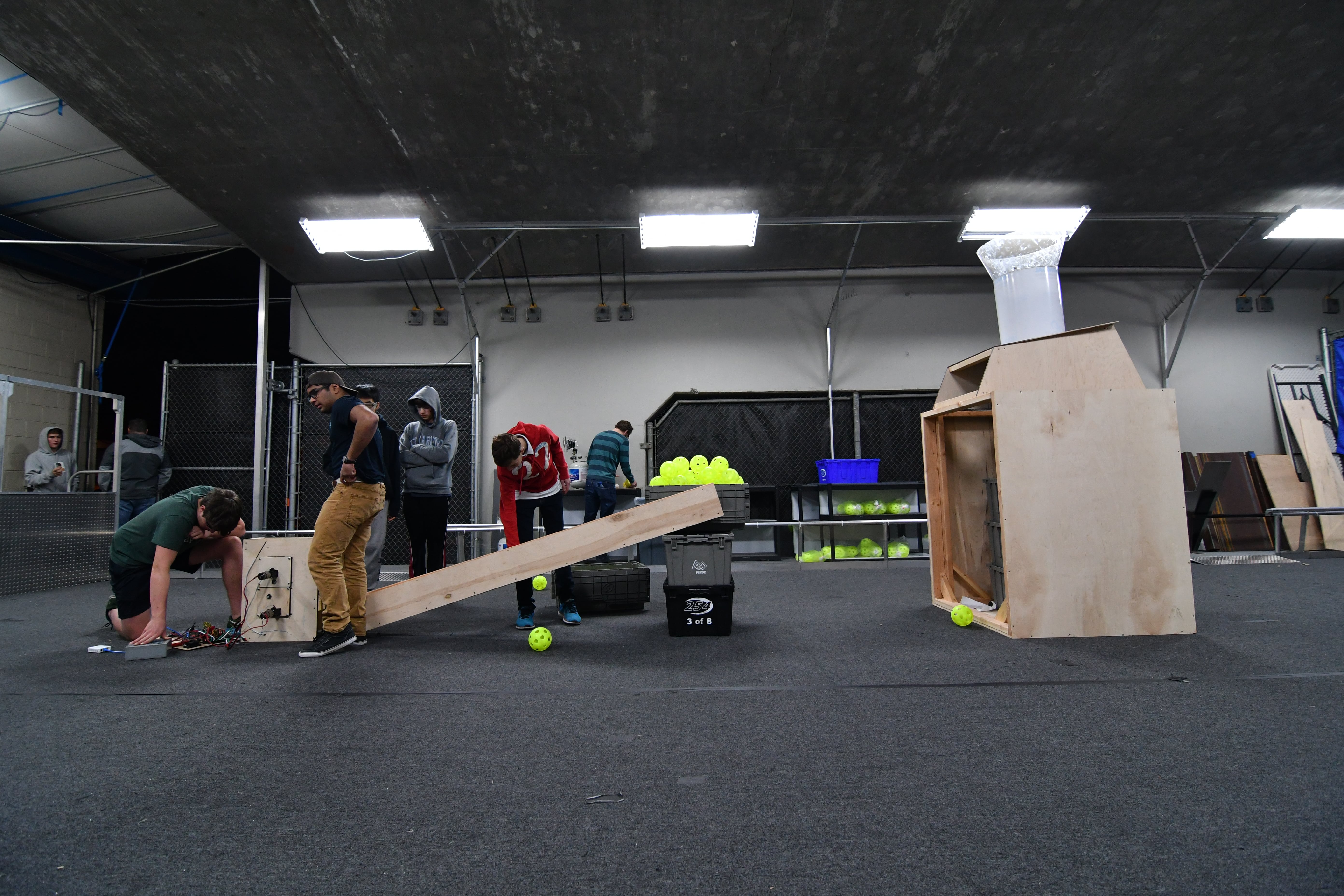 Today we worked on a new and improved design for the intake. We CADed new sidewalls with updated geometry, in order to get rid of the ramp and make the intake easier to deploy. We laser cut the sidewalls and are almost done assembling the new prototype. The plan for the future is to finish it early on Wednesday, then run tests to see how effective it is.

Today at the lab, we worked on the feeder for the intake. Unfortunately, the whole process took a long time because we struggled so get the vertical portion of the feeder to spin at all due to efficiency issues with the design. Once we did get it working, however, we modified the lower roller in order to increase the spacing between it and the vertical roller. Though this would be effective, but generally we found that the current design simply needs too many modifications, so it would just be easier to do a complete redesign. The next step is to look into other feeder systems that are potentially more efficient and faster.

Today, the team working on the rope climbing switched the previous 775 pro motor for a CIM motor and succeeded in climbing the rope. We first laser cut a new piece of wood that would connect to a cross bar on the robot holding the motor and comb shaft. We moved the holder for the motor and shaft one inch up to provide clearance for the motor as well as give the comb more room away from the crossbar. After this, we assembled a CIM motor planetary gearbox in which we geared the motor 1:9 and this ratio was also later increased through the gears on the shaft to 1:45. This proved to be enough to lift the approximately 30 pound previous drive base of our 2015 robot, Deadlift. Without success, we found that undoing the rope on the comb proved to be very difficult and time-intensive, so went back to the drawing boards and found that a velcro design could work out well while taking less time to undo. We will assemble and test this during the next build.

Today we made leaps and bounds with the shooter prototype. We were able to score 30 balls consecutively feeding into our dual-motor flywheel shooter prototype. To do so, we fine-tuned the PIDF constants in the robot code to ensure that motor speed would remain constant even with the load from the balls, which ensures more consistent, accurate shots. This is a breakthrough for our shooter prototypes, the first time where we’ve been able to make a majority of shots from a stream. We still have to improve the firing rate of our prototype; we were firing at ~3 balls per second.