We continued to revise the two horizontal-rollers prototype so that it would be ready for proper implementation on the final design. Some of the most recent changes made include a stop, so that the ball is physically limited from entering more than 3 inches into our robot. Unfortunately in the earlier tests the ball actually entered 4 inches into our robot and roughly 1/16 inch off the ground. We also shifted the upper roller as forward as possible while retaining space for the bearing and moved the lower roller forward. The roller speed was also increased from the window motors with a 4 to 1 pulley reduction Videos should follow tommorrow after the design is perfected further. 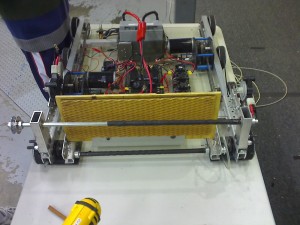 Down in the shop we continued to pocket gears on the CNC and several sets for both the drive-train gearbox and the shooter winch gearbox have been manufactured already. Hopefully by the end of tommorrow we will be for the most part done pocketing the gears (at least the ones finalized on the design). They will be ready for ship by Monday or Tuesday.