Today progress was made on the bumper pieces, including machining the wood and corner brackets.  We hope to finish the bumper structure by the end of Friday, to begin material cutting and sewing on Saturday.  At this time, I do not expect the bumpers to be complete before ship, as the sewing is estimated to take a few days.

Tonight we drilled the arms to fit the bushings.  Below is a picture showing the drilling operation. 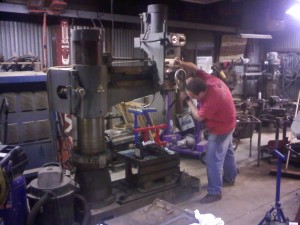 Tomorrow we will begin assembling the arm, and make any necessary adjustments for proper fitment.

The manufacturing team worked hard today to machine the ratchets and finish the bar grabbing clamps.  The lathe was also hard at work making spacers, standoffs and shafts.

After the arms returned from the powder coat shop today, several members of the assembly team assembled one complete arm (minus sprockets which will arrive from anodize tomorrow). 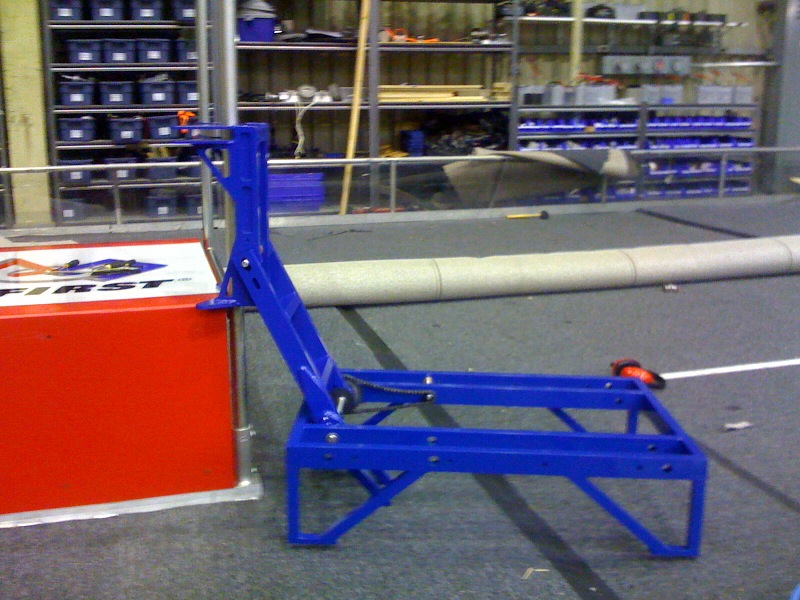 The field construction team worked hard today to continue to carpet the bumps and other field elements.  The field should be completed in the next few days.

At the proving grounds, multiple teams worked on various parts of the robot to ensure that major components will be complete by the weekend.

In the design department, students and mentors completed the PCB design for both the gyroscope carrier and a revised LED driver. The PCB was sent to fab at 11:00PM. We will receive them Friday.

Down at the assembly line, students and mentors assembled major components in the drivetrain gearboxes. Unfortunately, the entire gearbox was not fully assembled due to the lack of a few components(PTO sprocket, gearbox standoffs).

Both robots’ wiring is almost complete. Tomorrow, we will complete the wiring by adding the 4AWG cables.

Due to a manufacturing error we are issuing an immediate recall of part no. 1010081. We apologize for the inconvenience this may have caused you. The part requires a bore to .722 in order to fit onto the 5/8 hex shaft. If you lack the tools necessary to carry out this change please notify us. We can be reached by post, phone, or email. Thank you again for your patience and understanding and as always, choose Team 254.

We now have bumper fabric.  The picture below shows the colors.  The material and color looks great in person, better than the picture. 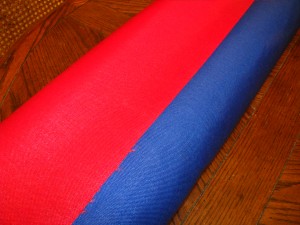 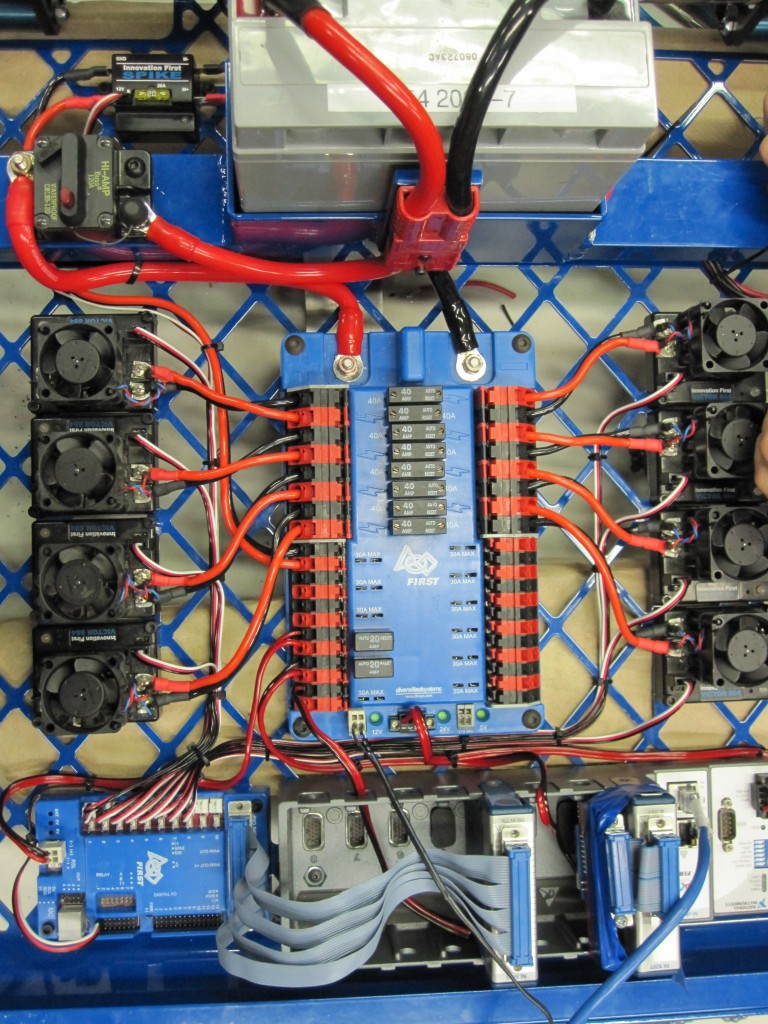 Today, wiring was done on the practice robot.

Today our procurement personell spent the day picking up several parts and materials, including plywood for the bumpers and switches, wire, and LEDs for the control boards.  The plywood selected for the bumpers is a premium quality 12-Ply 3/4″ Russian Baltic Birch.  The 5″ height blanks were cut today, and will be cut to length tomorrow.  Below is a picture of cutting the bumper pieces. 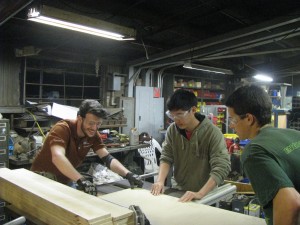 The picture below shows construction and testing of the LED driver circuits for the control board. 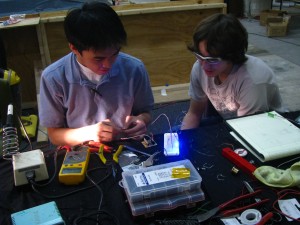 Finally, we picked up the other two upper arm segments from welding. They are shown in the picture below.  These are for 254. 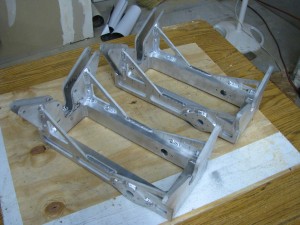 The design is coming along and is almost finalized.  The roller assembly is completely finalized and several small details need to be ironed out elsewhere on the robot.

The [hopefully] last batch of parts from McMaster has been ordered, giving us the parts to complete our rollers.  Two AndyMark orders have also arrived, allowing us to proceed on modifying the roller sprockets for transportation to 968.

Today, the lab contained a large group of students intent on completing important field setup tasks.  The side borders have been setup and the towers have been placed in their final position.  Some of the bumps are laid out but we are still waiting on carpet from FIRST.

The crate building team worked hard today to attach the last remaining side (the bottom) to the metal frame using wood screws.  Several vinyl stickers were also cut and applied to the crate. 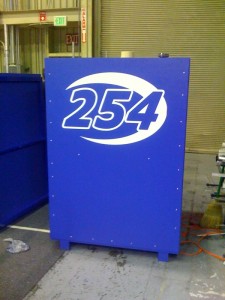 After an all-night machining marathon last night, the arm parts were completed to be welded today.  Our generous supporter Foes Racing was able to align and tack weld all the pieces into place this evening. Foes did the welding for the launcher and top arm in 2008 also.   Below are some quick snapshots of the parts just before leaving Foes for the evening.  The arm parts will be welded tomorrow night.  Please take a close look at how everything is assembled, and quickly bring it to our attention if anything seems incorrect. 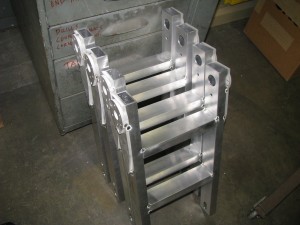 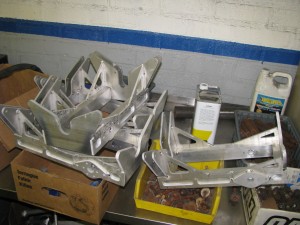 Efforts were made to align holes in waterjetted pieces with holes in the box tube pieces, and to ensure squareness during the tack-welding process.  After welding is complete, a 0.875 reamer and a 1.250 reamer will be needed to enlarge the holes in the waterjetted pieces.  Additionally, all threaded holes still need to be drilled and tapped.

The official FIRST field components arrived today and were taken inside to be inventoried (and played with).

Field setup will begin in the next few days, as soon as we determine which building we will be setting it up in.   If you get the chance, please thank Mark Leon and NASA for their generosity and support in getting us these field components.  Please remember; we were lucky enough to receive these field components with the understanding that we would open our lab up and invite the other Bay Area teams to utilize it whenever possible.  Let’s make sure we are gracious and welcoming hosts when they arrive, and that we fully understand how lucky we are to have the opportunity to help everyone out.  We also need to take care of these components and keep them nice, as we can expect to use them at all of the local scrimmages and events that require a full sized field. 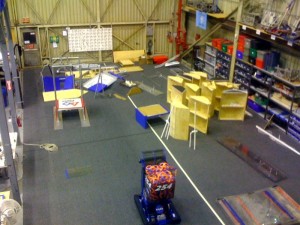 The design team has been working hard to design the roller system, the final major robot system to be designed.  The plates will be sent out for waterjet cutting at BAE systems tomorrow.  The CAD predicts the robot weight at about 110 lbs, but does not include certain items such as pneumatic tubing, fittings and all wiring. 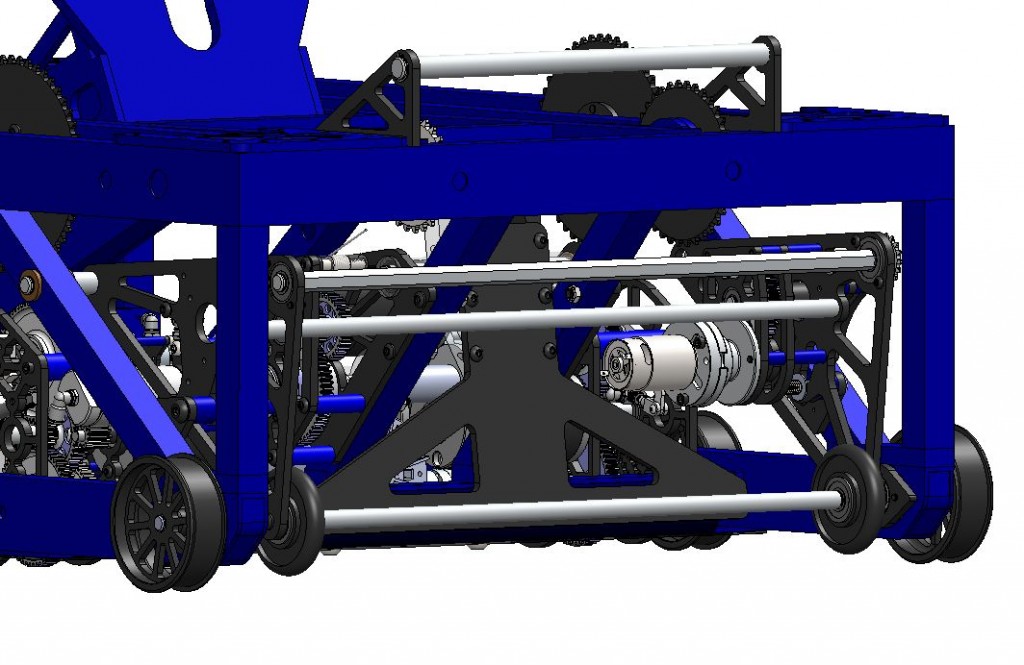 Today we were able to cut out the polycarbonate for a control board on the CNC router at Glendale Community College.  It took much longer than expected, due to the polycarb melting at any feed rate over 18 IPM, even with a constant cool air blast on the endmill.  Machine setup took about 75 minutes, and fixturing, cutting, and removing the panels took about an hour.   Tomorrow evening we will finish cutting the second board.  Below is a picture of the assembled control board. 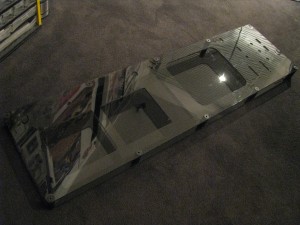 The manufacturing department was very understaffed today due to the superbowl(I guess?) 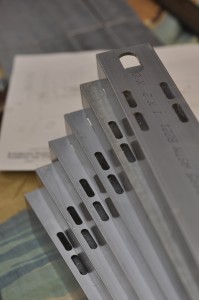 Tonight we completed the four piston bearing blocks (1010073) for the kicker winch.  These took much longer than anticipated using manual machines.   Below is a picture of the completed parts: 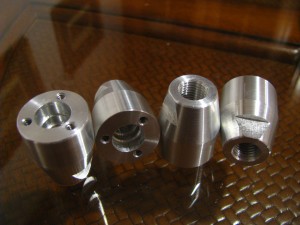 For the small piston bearing blocks (1010019) we hope to have a CNC lathe available tomorrow evening.  Tomorrow we hope to cut out the control boards as well, on a CNC router.

The 1 x 2 x.125 box tube parts for the arm structure have been cut, and are currently undergoing milling and drilling operations, and preparation for welding this week.

After receiving our frames very late last night, we began wiring today.  We mounted all of the electronics and ran the 4 gauge primary power wires. 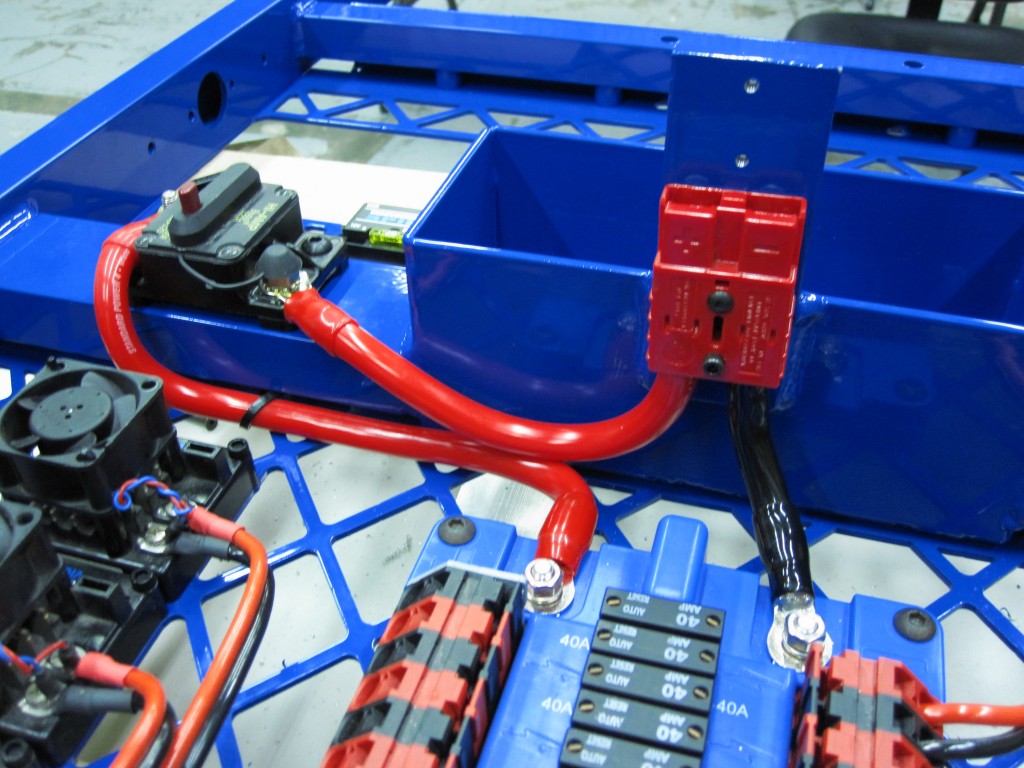 We then proceeded to run wires for the Victor 884 speed controllers.  After several separate configurations, the most popular involves running each Victor power wire independently and not zip-tying them together at all. 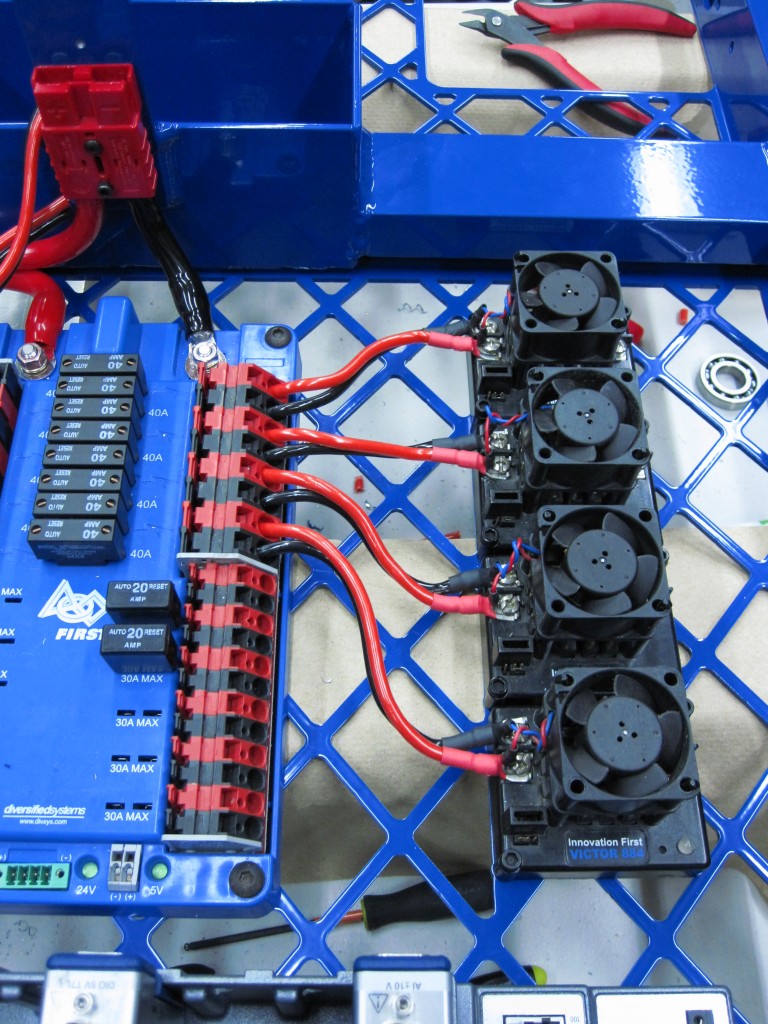 Besides working on the frames, the manufacturing department continued to lathe a myriad of spacers and standoffs for the kicker and drive gearboxes.  The CNC was working hard all day to cut dog ridges into our two separate dog gears and the dog lock plate.

A large group of students also worked hard all day on 254’s crate, ending with painting it. 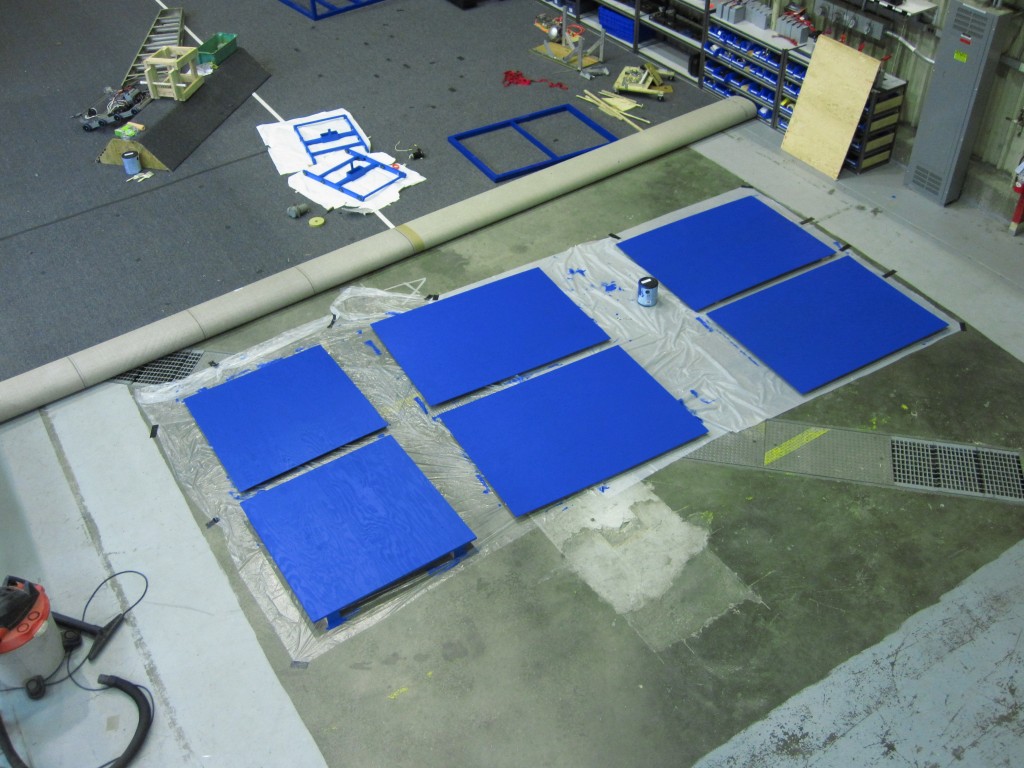 Bumper Mounting and Control Board Parts

Today we completed the 32 bumper mounting pins and brackets, and 20 control board spacers.  The bumper mounting scheme is nearly identical to the 968 2009 bumpers.  The finished parts are shown below. 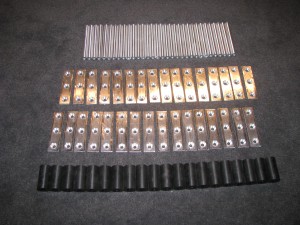 Next, we hope to cut the control board polycarbonate on a CNC router, and machine the piston bearing blocks (cones) on a CNC lathe.  Additionally, we will be cutting the 1×2 box tube parts needed for the arms.

Parts: A set of  manufactured parts has been sent to our sister team, 968.

Manufacturing: We are continuing manufacture of dogs for our kicker shaft.

In short, 254 is well on its way to finishing the robot (name TBD)

Here’s a picture of everything  completed so far (Minus gearbox plates and sprockets, which are out to anodize, and frames). 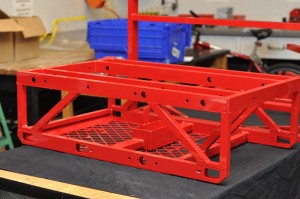 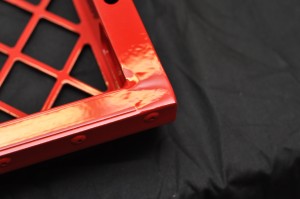 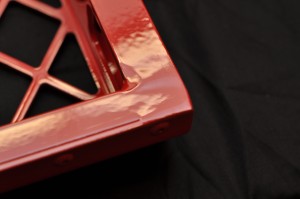 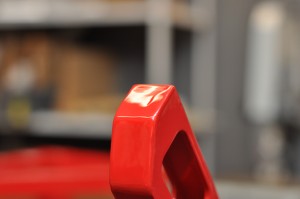 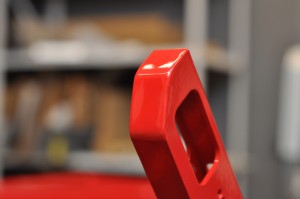 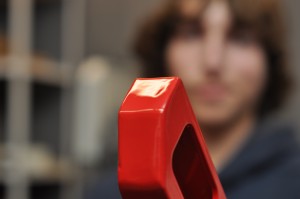 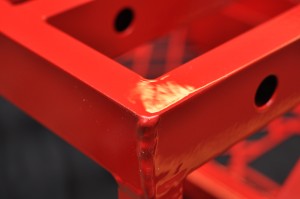 Unfortunately, Central Powder Coating was not well staffed today. They will have the 254 frames powdercoated blue streak #2 tomorrow morning. 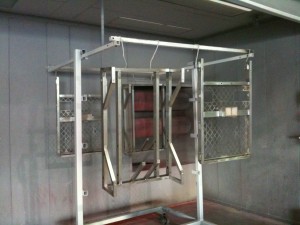 We will be picking up the blue frames tomorrow at 10AM.

This revision includes the cutout for the Classmate pc, contours and filets for the ethernet jack, holes for the LED mounts, screwdriver slots for the Cypress board and finally, an additional cutout that replaced the roller button. 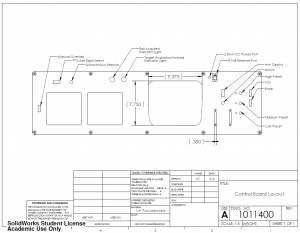