As a part of an extremely eventful weekend, one of our VEX teams, 254F, attended the VEX World Championship in Dallas, Texas. After qualification matches in the Arts Division, 254F (seeded 2nd out of 81 teams) accepted an invitation to play with the #1 seeded alliance, team 38141B PiBotics B. Together, we were able to win the Arts Division and advance into the Thunderdome, where we competed against the 8 other division winners to win the World Championships! 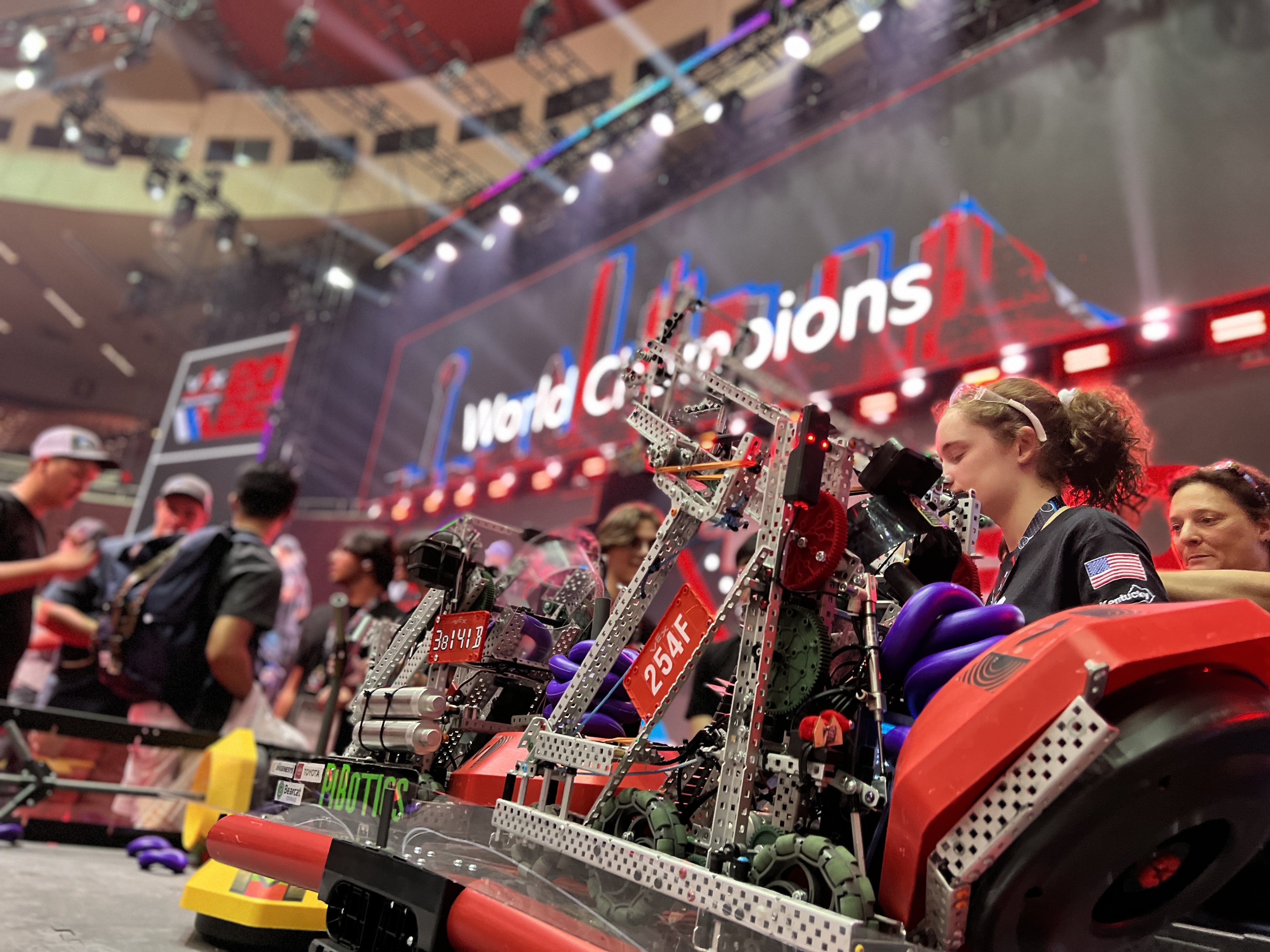 Our robot experienced few mechanical issues, so a lot of time was spent before qualification day fine tuning our autonomous code in preparation for the bevy of matches that were to come. We performed very well in our qualification matches, coming out with an 8-2-0 record and the second highest OPR in the Arts division. This success resulted in a 2nd place ranking with 23 win points. Going into the elimination rounds in the Arts Division, Team 38141B PiBotics B, the #1 seed, invited us to their alliance.

We won every elimination match leading up to the finals, where we played 7 division final matches because of field errors, white screens, and many other issues. The strategy we used with Team 38141B was very simple. During auton, we went for the middle mobile goal, contested or not, because we had one of the fastest center mobile goal rush capabilities in the tournament. Team 38141B would be on the left side and would rush, either using their extender or not, depending whether they were contested. The main driving strategy we used was dependent on the number of rings we had scored. If we had more rings than our opponent and a greater amount of mobile goals, then we would drive up the platform with our mobile goals and have 38141B stack the mobile goals next to us. In any other situation, we would have both robots elevated on the platform with all possible mobile goals. This worked extremely well even though we had one mishap. It happened when our opponents in the finals changed places, but we quickly adjusted and made an appropriate counter. We simply rushed without using our extender and beat our opponents, leading them to revert back so we could follow our original strategy.

Our alliance used a very similar strategy inside the Thunderdome. We used the same strategy as in the divisional rounds, because we knew no one would be able to counter it. Our assumption proved correct throughout the quarterfinal and semifinals.
Then came the finals. We misaligned our auto in the first match, causing us to be at a disadvantage due to a low mobile goal count. For the second finals match, after double and triple checking our alignment, we deadlocked with our opponents on the central mobile goal. Trusting in our robot, we continued the deadlock while 38141B collected rings around the field, our opponents eventually let go of the contested mobile goal, and the scoring from our alliance partner won us the match. In the tiebreaker match we missed the auto again, but our skilled driving and double park won us the match and the tournament!
We would like to shout out Team 9257C House Cats and Team 4154X U.S.S.R. for being an amazing alliance to compete against. Our alliance was very fortunate to emerge victorious after three incredibly competitive and nail-biting matches. 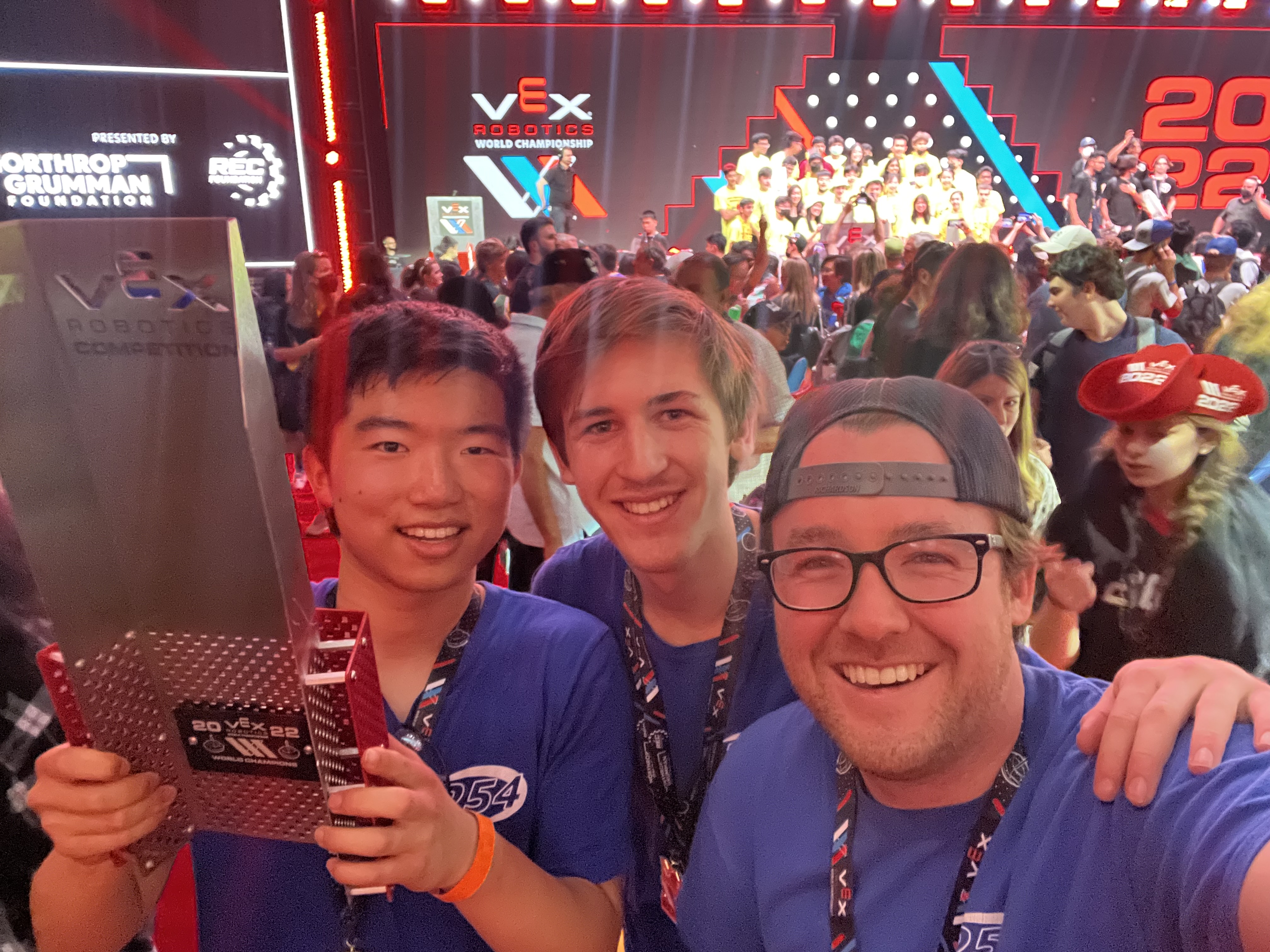 At the 2022 VEX World Championship in Dallas, we would have not have been able to be so successful without the amazing teams that we were able to work with during our matches. Special shout out to our pit crew and scouts for keeping 254F functioning at 100% capacity. We would also like to highlight the efforts of our mentors to make this experience possible for all of us. Lastly, Team 254 would also like to thank all the volunteers and referees that made this tournament an exciting experience. 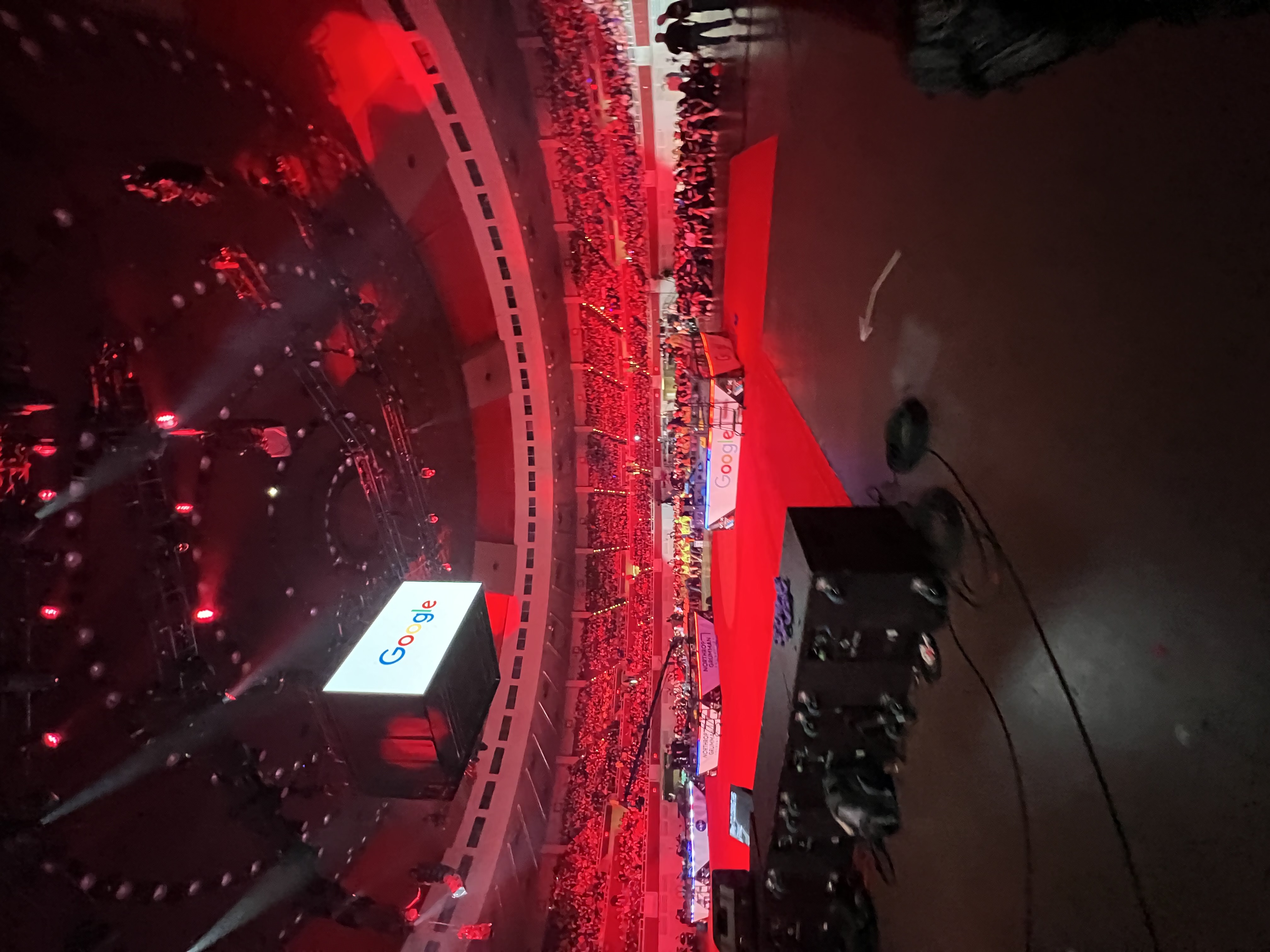 As part of an eventful week, we attend the 2022 FIRST World Championship in Houston, Texas from April 20th to April 23rd. After qualification matches in the Galileo Division we accepted an invitation to play in the playoff rounds alongside the #1 seed Team 1619 Up-A-Creek Robotics, along with Team 3175 Knight Vision, and Team 6672 Fusion Corps. Our alliance was able to win the Galileo Division and advance to the Einstein field to face the other five division winners, where we ultimately won our fifth World Championship! 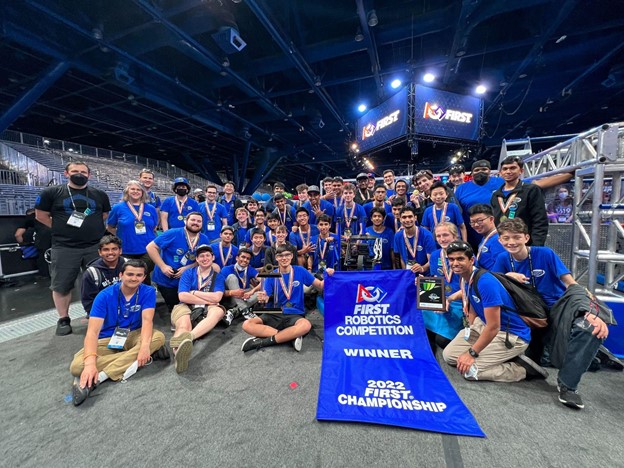 Throughout our qualification matches, we wanted to make sure that we secured four ranking points during each match. In order to do this, we tried to win the match, shoot at least 20 balls in the upper hub, and have an alliance partner climb with us. Through the efforts of our drive team and pit crew, our robot performed admirably each match. We achieved a 8-1-1 record, and a ranking point average of 3.60, with a rank of 4th out of 76. 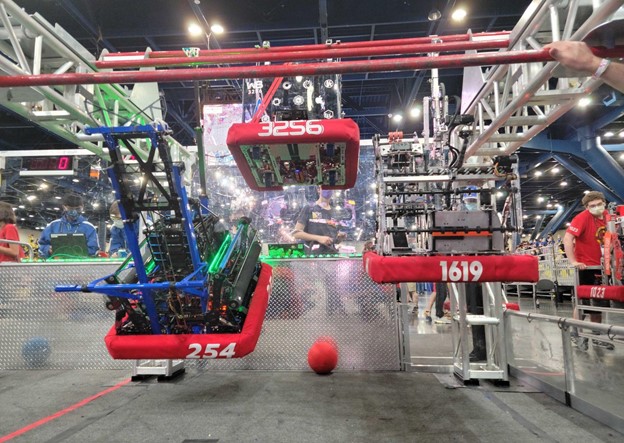 Going into the playoff tournament in the Galileo Division, Team 1619 Up-A-Creek Robotics, the #1 seed, invited us to their alliance, along with FRC Team 3175 Knight Vision and FRC Team 6672 Fusion Corps.

From a strategic perspective, our alliance wanted the ability for all three robots to contribute offensively and defensively. We also wanted to have a triple traversal climb, to give our alliance more strategic flexibility and higher points ceiling. We were very lucky to be with three amazing teams that complemented each other perfectly.

On the Einstein Field

Our alliance modified our strategy during the Einstein matches, with Team 6672 playing more of a defensive role against the opposing alliance. Each of our three robots also attempted to climb to the traversal rung during the endgame, knowing that the first tiebreaker after wins was average Hangar points. Our performance allowed us to move on to the finals, facing the Turing Division winners. In the finals, our alliance won the first match by a single point and then lost the second match. In the tiebreaker match, our alliance’s strategists opted to swap out Team 6672 for Team 3175 to attempt a different defensive strategy that would allow us to control two opponent balls to help starve our opponents, and changed our offensive approach to try and avoid the very effective defense played by Team 4099 against us in the previous matches. Thanks to this new strategy and to our autonomous mode working better than previously, we were able to win the finals tiebreaker. We would like to shout out Team 1577 Steampunk, Team 4414 HighTide, Team 2539 Krypton Cougars, and Team 4099 The Falcons, for having an amazing alliance. Our alliance was very fortunate to emerge victorious after three incredibly tough and competitive matches.

At the 2022 FIRST World Championship in Houston, we would not have been able to be so successful without the amazing teams that we were able to work with during our matches. Also a special shout out to our pit crew and drive team for properly maintaining our robot during the tournament. We would also like to highlight the efforts of our alliance readiness crew to keep our alliance partners ready throughout the tournament. Team 254 would also like to thank all the volunteers and judges that made this tournament an exciting experience, and all of our mentors, teachers, and parents who supported us and helped us succeed. 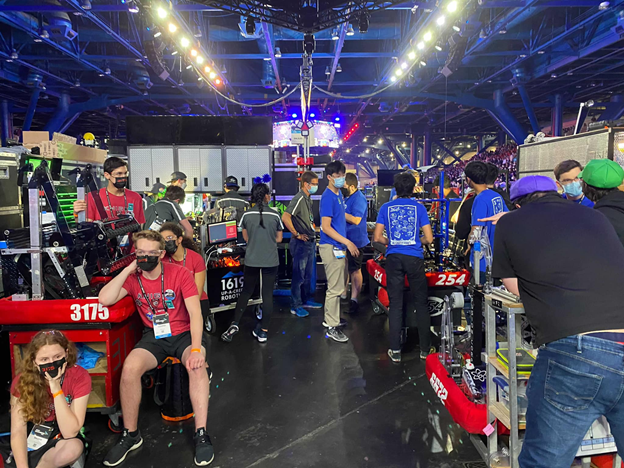 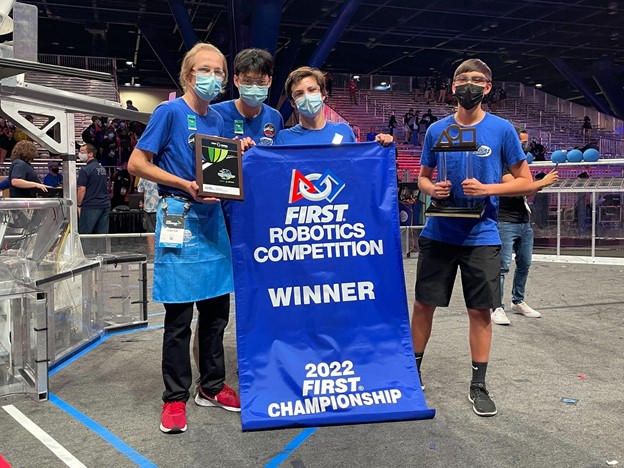 As part of an eventful weekend we attended the 2022 Silicon Valley Regional in San Jose, CA. We had a great time at our second tournament of the FIRST Rapid React Season with our robot, Sideways. Alongside FRC Team 1678 Citrus Circuits and FRC Team 7419 QLS Tech Support, we were able to win the tournament, along with taking home the Quality Award! 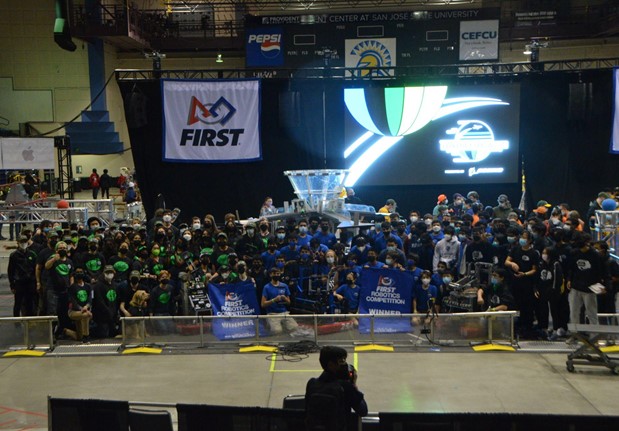 In the qualification matches, we executed a strategy to earn all four ranking points by winning the match, scoring at least 20 balls in the upper hub, and climbing to the traversal rung. Through the tireless efforts of both our alliance partners and our own team members, we achieved a 9-0-0 record, and a perfect ranking point average of 4.00! 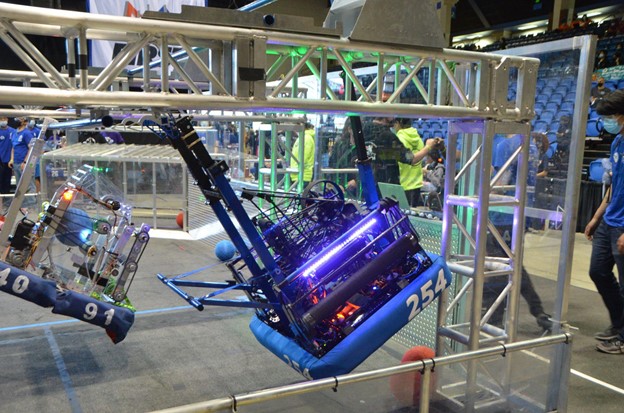 Sideways hangs, with an alliance partner, at the end of a qualification match 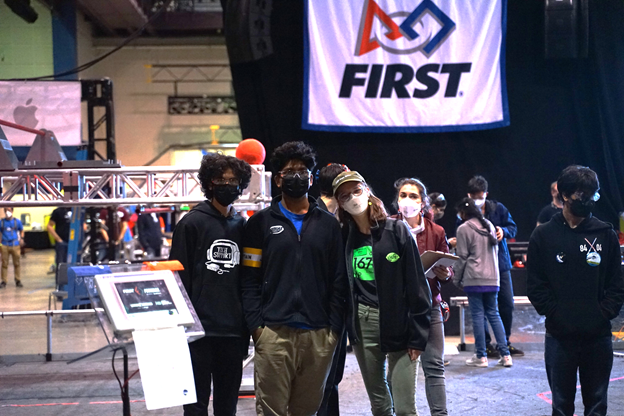 Team 254 representative, Nikhil Gangaram, stands with Team 1678 and Team 7419 as they agree to join our alliance

Going into the playoff tournament, we were excited to be able to form an alliance with FRC Team 1678 Citrus Circuits and FRC Team 7419 QLS Tech Support.

During the playoffs, we employed a strategy that involved our robot and Team 1678’s robot to be on opposite sides of the field, so we didn’t cross paths and bump into each other. This strategy maximized our total cargo collected and shot. We knew that balls would get stuck behind the hub, so Team 7419 swept the backside of the field while playing defense on the opposing alliance’s robots. Just before the endgame started, Team 7419 started to climb, in an attempt to get all three robots on the traversal rung. 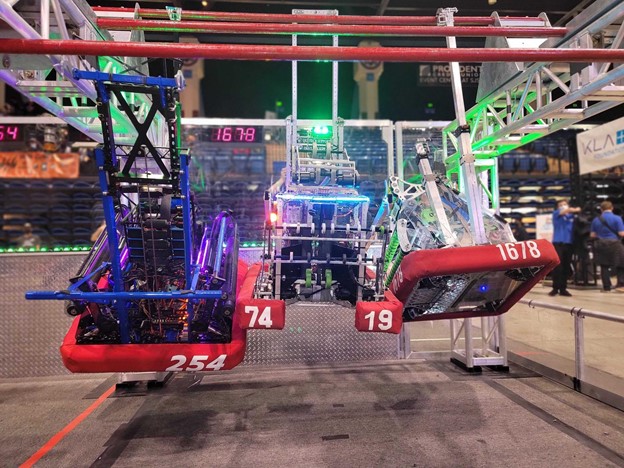 At the Silicon Valley Regional, we would not have been able to be so successful without the amazing teams that we were able to work with during our qualification and playoff matches. Also a special thanks for our pit crew and drive team for properly maintaining our robot during the tournament. A big thank you to the Chairman’s Award team for presenting our submission in front of a panel of FIRST Judges. Team 254 would also like to thank all the volunteers and judges that made this tournament an exciting experience, and all of our mentors, who helped us succeed in this regional. 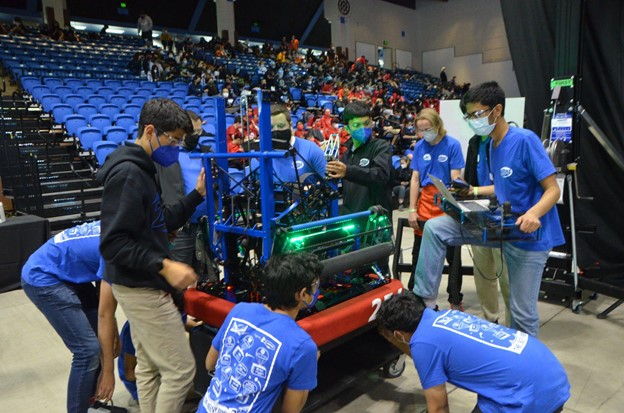 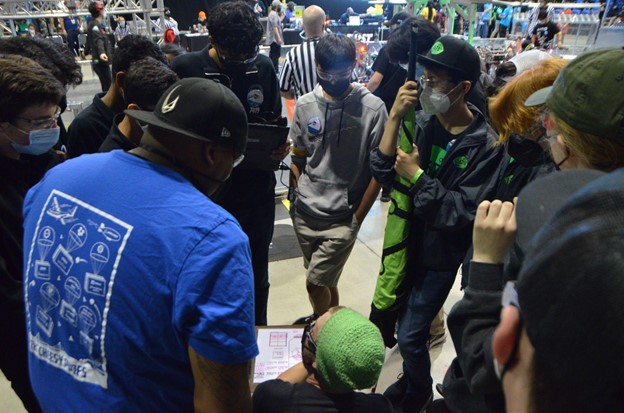 Drive team members of Team 254, 1678 and 7419 strategize before an upcoming playoff match 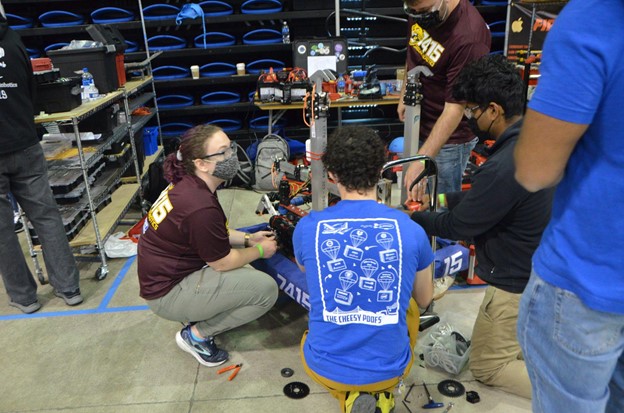 A Brief Summary
As part of an eventful weekend, we attend the Sacramento Regional in Davis, CA! We had a great time at our first season tournament after two long years. Alongside FRC Team 1678 Citrus Circuits, Team 5458 Digital Minds, we were able to win the tournament!
Robot Performance
Qualification Matches
Through our qualification matches, Sideways performed very well. Despite bearing one loss, going 10-1 overall, we were able to score an average of about 118 points with our alliance partners per match. According to our scouts, we scored an average of 79.5 points, in most of our qualification matches. We sought to earn the maximum number of ranking points, which meant getting an alliance partner to climb, and shooting at least 20 balls into the upper hub, which would get us to 2 RP. To get the final two ranking points, we had to win the match. Through this strategy, we set a world record of 177 points in our first match. At the end, we were the first seeded alliance heading into elimination matches.
Alliance Selection
Going into the elimination period, we chose to form an alliance with FRC Team 1678 Citrus Circuits, and FRC Team 5458 Digital Minds.
Elimination Matches
For elimination matches, we aimed to focus on shooting cargo and climbing as much as possible, hoping to get 20+ balls in the upper hub, and to have at least two robots on the traversal rung. Alongside our alliance partners, we were able to execute this plan well, even breaking our own world record with 180 points in a semifinals match. Our streak continued as we went on to win our finals matches against Team 973, 7157, and 5274, winning the tournament.
A Special Thanks
Also, a special shoutout to our pit crew and drive team for properly maintaining our robot, and our alliance readiness crew, who supported other teams throughout the tournament. Team 254 would also like to thank all the volunteers and judges that made this tournament possible, and all of our mentors, teachers and parents who supported us and helped us succeed!